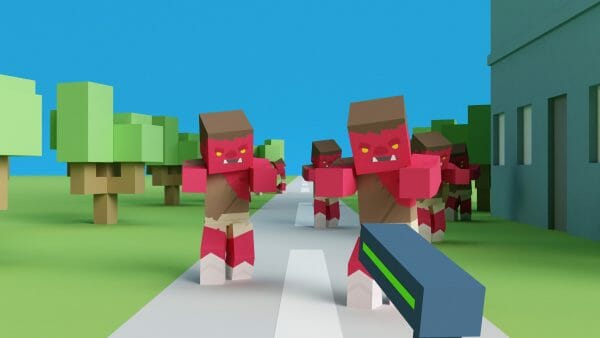 Ask someone to name a video game, and chances are they’ll come up with a first-person shooter (FPS) series like Call of Duty or Halo. The FPS has been one of gaming’s most popular genres for many years, and so it’s only natural that many budding game designers will want to try their hand at creating their own.

To help out budding FPS developers, we’ve compiled some of the best FPS tutorials available to assist you in learning the basics of creating an FPS and expanding your skill set to take on more complex projects.

Note that this list is intended for individuals – teachers may have better luck with platforms like Zenva Schools for helping to find teaching resources for the classroom.

Why Should I Learn To Make An FPS?

First-person shooters are some of the most popular games around, with huge franchises like Call of Duty, Battlefield, Halo, Apex Legends and more attracting millions of players with their fast-paced shooting action. As such, there’s a huge market for first-person shooters – so if you make your own, there’ll be no shortage of players for it!

Aside from their popularity, FPSs are also an ideal genre for beginner game developers to practice their skills and master a variety of different mechanics. Creating an FPS involves designing 3D environments, programming enemy AI, creating interactable items, coding player weapons, and more. FPSs are also a helpful backdrop for learning to animate and program 3D characters with simple behaviors, movements, and actions.

In short, learning to make an FPS helps you pick up all manner of game design skills and systems along the way. Creating an FPS can therefore help beginners to learn a variety of fundamental game design skills while allowing more experienced developers to add new mechanics and systems to their skill set for use in later projects.

The following list includes our top picks for FPS design tutorials that help you to learn about the fundamental systems and mechanics involved in the genre.

Most of them are designed for beginners, requiring only a basic understanding of the relevant game engine or programming language. However, even more experienced coders will get a lot of use out of these tutorials, as they’re a great way of picking up FPS-specific skills that you might not have encountered before, allowing you to add new systems to other game projects in the future.

If you’re looking for an entry-level introduction to the world of the FPS, then one of the best options is Construct A First-Person Shooter. This FPS tutorial from Zenva Academy provides a detailed, step-by-step guide to creating your very own FPS in the Unity game engine.

Across a series of video guides, you’ll learn various essential mechanics needed to create a fully-functioning shooter, such as player movement, power-ups, and weapons. You’ll also learn how to create pathfinding enemies that provide a solid challenge for players, helping to create an engaging and exciting experience even within your first game in the FPS genre.

All you need to get started is a basic understanding of Unity and C#, making this a perfect option for beginner coders who have learned the basics and want to make a start on their first real game project.

How To Build Your First FPS Game

If you’re a complete beginner in game development and coding and you want an easily accessible entry point, then this official Unity tutorial could be the option for you. Led by two Unity Certified Instructors – Brian Kenney and Alexei Othenin-Girard – the How To Build Your First FPS Game tutorial helps you create your first FPS without even needing to code.

The tutorial uses Unity’s FPS Creator Kit as a starting point, which requires no coding and simply aims to teach beginner game devs about the various mechanics needed for an FPS. Part 1 provides a guide to setting up the Unity Creator Kit, an overview of the Unity Editor, a guide to designing a simple level, and instructions on creating your own prefabs.

Since this tutorial requires no coding, those looking for practical experience with Unity and C# may decide to look elsewhere. However, as an introduction to the FPS genre, this tutorial makes for a great place to start for complete beginners.

Another Unity tutorial series, this time provided by game dev YouTuber Fuelled By Caffeine, the Unity FPS Tutorials series provides beginners with a detailed guide to creating an FPS from the ground up. This ongoing series explains the process of creating an FPS step-by-step, with each video introducing new mechanics and systems to build into your game.

The tutorial series uses bite-sized videos of around 20 minutes in length to make it easy for beginners to master each concept, or for more experienced coders to jump in at specific points where they want to learn about a particular mechanic.

As well as covering fundamental aspects of an FPS like player movement, aiming and shooting, this series also covers more advanced systems that can help your project appear more polished. For example, later videos explain how to add idle animations and weapon sway to make your player character’s movements feel more natural and realistic.

Duration: Currently a series of 21 videos totalling about 5 hours, 10 minutes, with further videos to be added over time.

If Unity isn’t your cup of tea, then there are also plenty of great tutorials that explain how to create an FPS in other game engines. For example, there’s Develop A First-Person Shooter In Unreal Engine, which helps you to do exactly what it says on the tin.

This tutorial demonstrates how to build an FPS from the ground up using the popular Unreal Engine, enabling you to expand your skills and experience with this platform while also learning the fundamentals of FPS game design. By the end of the tutorial, you’ll have created your own simple FPS game with animated enemies to challenge your players.

This tutorial makes for a great entry-level project for learning the foundational skills of game design and various game mechanics which you can then implement in other action-oriented game projects. You’ll need a basic understanding of the Unreal Engine before starting, but the tutorial does a great job of walking you through the entire process of crafting your own FPS, so it’s very beginner-friendly.

Make A First-Person Shooter In Unity

Yet another option for creating your own FPS in Unity is the Make a FIRST PERSON SHOOTER in UNITY tutorial from tutorialsEU. This is a 3-hour course that shows you how to make an FPS from scratch, and it’s an ideal starting point for beginner coders or those who are new to the genre.

This tutorial provides you with a step-by-step guide to creating a simple FPS game of your own, covering a variety of crucial elements like map design, movement controls, and the user interface. You’ll most likely need some basic Unity and C# experience to follow along, but for beginners looking for their first FPS project, this is a great place to start.

Another alternative for those who aren’t keen on using Unity for their game development projects is the Build A First Person Shooter With Godot tutorial. This tutorial teaches you to build your own FPS game with Godot, a free, open-source engine designed specifically for use by indie developers. Thanks to this background, the Godot course is perfect for creating an impressive FPS without needing tons of resources.

The tutorial gives you a step-by-step introduction to the fundamentals of an FPS, providing detailed instructions at each stage to implement various key elements of the genre. These include programming enemy AI, moving your player, collecting powerups, and more.

This is an excellent starting point for anyone interested in creating their own FPS, and also offers transferable skills in terms of manipulating and animating objects within a 3D environment. You’ll need some existing familiarity with Godot and its GDScript language, but the step-by-step guide makes it a perfect choice for novice game designers.

Creating your own FPS can be a highly rewarding experience that teaches you all manner of skills, concepts, and mechanics that you can apply to future projects, allowing you to create more diverse and complex games. It’s also a fun experience in and of itself, leaving you with your own FPS game to play and challenge others with.

So, if you’re ready to create your first FPS and develop new game design skills, start off with one of the tutorials above and have fun creating an exciting, challenging shooter of your very own! We’re sure that, given its sheer popularity, learning to develop FPS games will continue to pay off for years to come.

Are you an educator? Try out Zenva Schools – a K12 platform of online courses focused on coding for the classroom. Featuring tons of features from classroom management to reporting, Zenva Schools is a one-stop shop for teaching topics like game development.