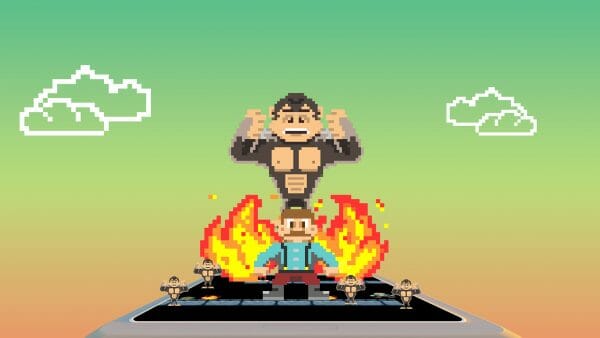 Do you want an easy-to-use game framework to build your dream projects?

Kaboom.js is a relative newcomer to the game development scene, but it is already making a big splash – especially among indie creators. This JavaScript-based library was made specifically with games in mind, in the same vein of frameworks such as Phaser or Pixi.js. However, there are many aspects that have made it stand above its competitors and worth your time checking out.

In this article, we’re going to introduce you to Kaboom.js and show you how you can get started learning this new tool.

As mentioned, Kaboom.js is a JavaScript library in the vein of HTML5 games, which use the browser to render games made with it. The library was made with the idea of simplicity, but comes with many important game development features – such as layering, collision detection, input handling, and more. Regardless, though, the goal is to allow novice developers to create game scenes as quickly as possible.

Game objects in Kaboom.js are conveniently rendered with a component-based system. This means they’re extremely easy to manipulate and apply behaviors too. The behaviors can include everything from simple game mechanics like health to basic movement-based animations – so each game object essentially suits object oriented programming principles.

Beyond this, it is worth noting Kaboom.js is also an available template for Replit – a popular, in-browser coding environment. This means its well-suited for developers who aren’t interested in setting up local development environments or just want to play around with the library.

Why should you use Kaboom.js? Below, we’re going to explore what makes Kaboom.js stand out and how, as a developer, you can benefit from the advantages Kaboom.js offers. 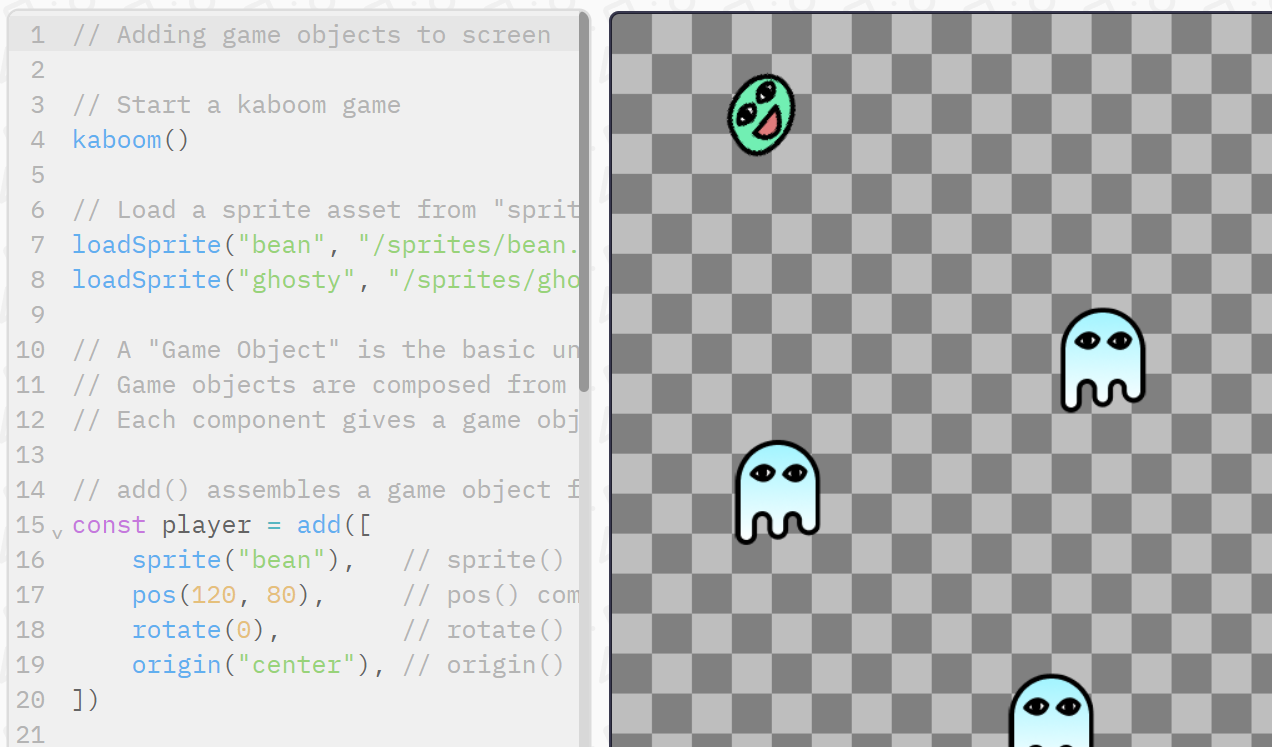 Unfortunately, not everyone has a computer that can run game engines such as Unity or Unreal Engine – which both are pretty process intensive programs. However, Kaboom.js does not require a great computer and can be used even with low-end laptops. In fact, due to its incorporation with Replit, as mentioned above, you really only need a browser if you’re intent on using it – not even a code editor is required.

Likewise, because of how lightweight it is, games made with Kaboom.js run very smoothly as well. This means you don’t have to get hung up too much on optimization. Instead, your games will likely run quickly right out of the box, leaving you more time to focus on what matters.

Many frameworks and libraries out there require several layers of dependencies to be able to run properly. If you forget the dependency, or more tragically, if the dependency has a breaking change, your game isn’t going to work.

Kaboom.js doesn’t require any sort of dependencies. While you certainly can add packages such as webpack, natively you just need to import the Kaboom.js library itself. Once that is added, you won’t have the extra worry of maintaining the dependencies. This helps Kaboom.js achieve its goal of making it quick to setup and allowing you to dive straight into the fun stuff of actually making the game. 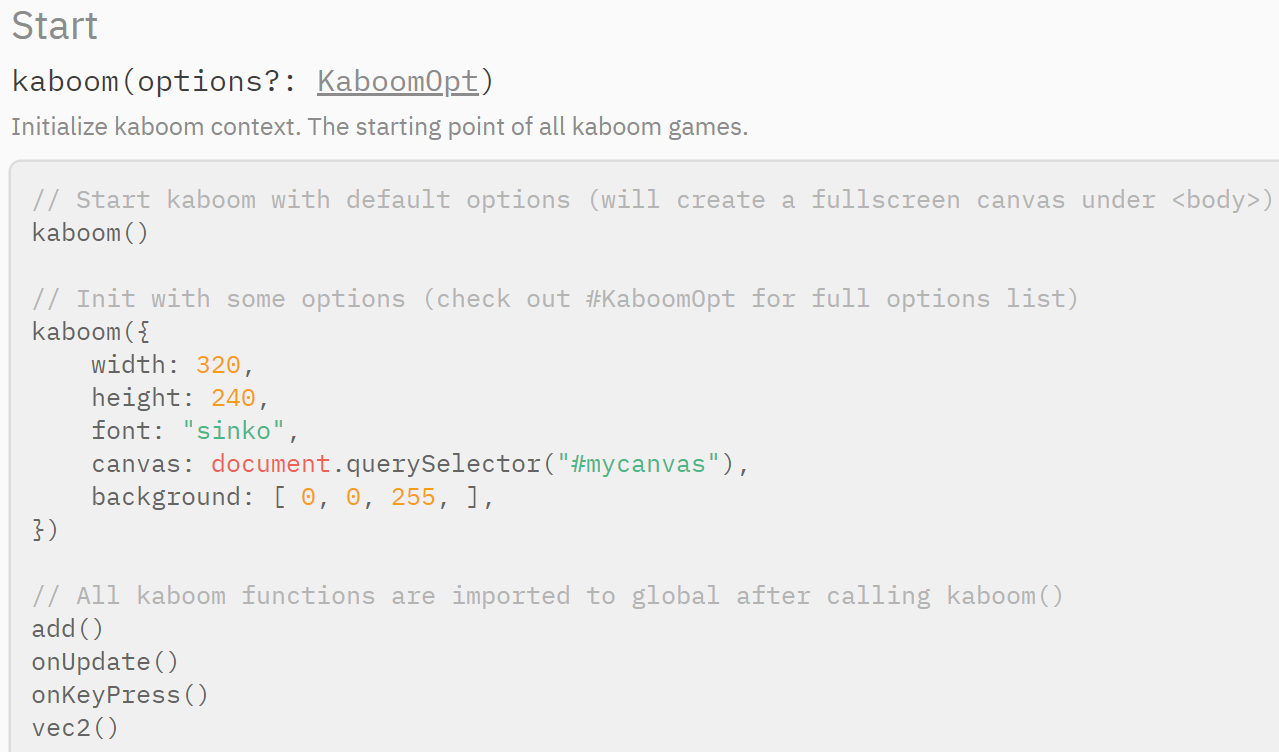 Since Kaboom.js is specifically for creating browser-based games, this means that there are no platform limitations. If the device can connect to the internet, your players can play it from anywhere.

For you as a developer, this means two things. First, this helps you avoid messy setups of needing multiple game versions just to have it available for multiple platforms. Second, this opens you up for a wider audience since you can tap into different sorts of players. All in all, though, this is a boon that makes it much easier for you to get the game into multiple different hands.

If you’ve ever tried to read documentation for frameworks or libraries before, you’ll know they can get rather complicated. If you don’t believe us, just go check out Unity’s documentation. While certainly this is fine for experienced developers, beginner developers are going to find this a nightmare.

Kaboom.js was designed to eliminate this problem and be as simple as possible. Not only does this help with keeping it lightweight, but makes the documentation much, much easier to understand when you’re just a beginner. This, in turn, just makes development itself easier.

Additionally, it comes with the extra benefit that this documentation can more easily be maintained as the library is updated. This means you won’t be reading old information that was relevant five versions ago.

Specifically made for beginners

As you might have seen from the previous points, beginners were at the heart of the design choices for Kaboom.js. Everything about the library is made to benefit beginners who have never made a game before. While there is a need for JavaScript experience before diving in, this is a much lower point of entry compared to heftier engines.

Thus, you’re only going to need a few tutorials to get the gist of how Kaboom.js works – and soon be able to develop your own projects with it.

Over the years, many HTML5 frameworks have come and gone. For others that remain, the development can often be slow and new versions, bug fixes, and features are few and far between. While many of these frameworks still technically work, the lack of developer support can eventually become a hindrance.

Kaboom.js, on the other hand, is very actively and caringly developed. Though we don’t expect them to break their principles of simplicity, improvements to the library come frequently. Thus, you can be assured the library will be supported for whatever time it needs for you to build your project. 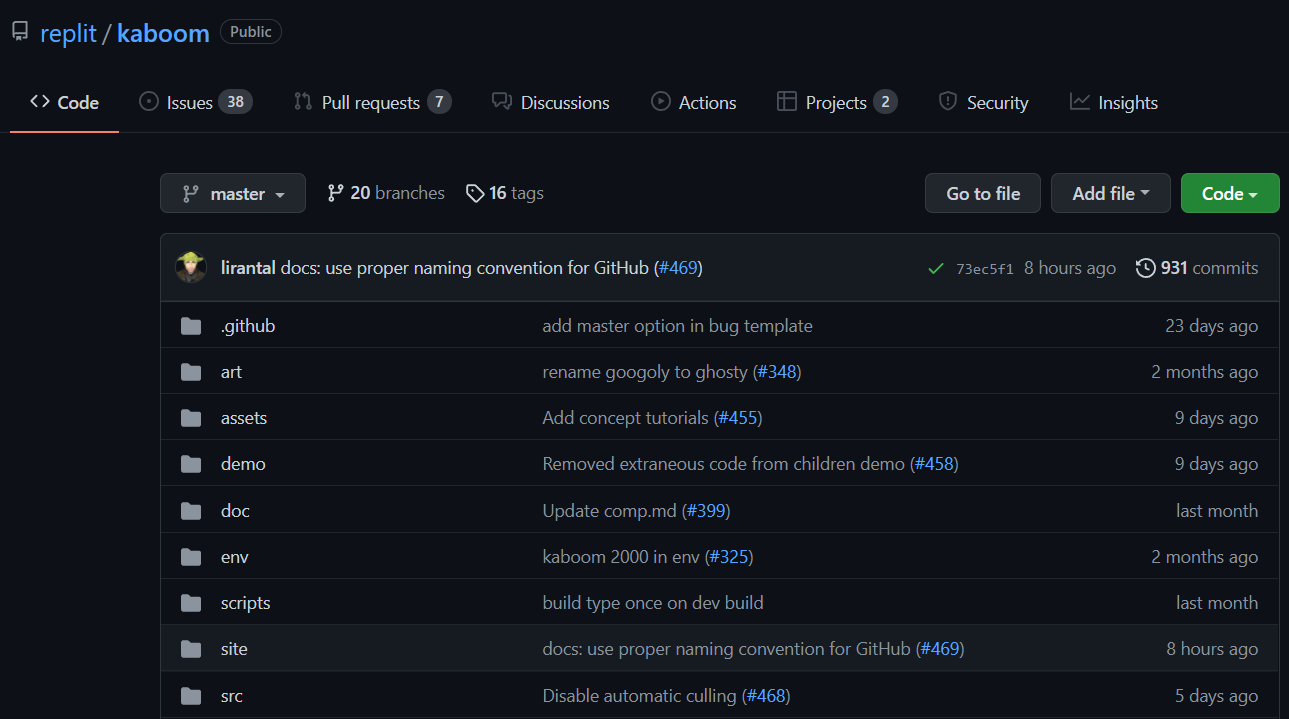 What can you make with Kaboom.js?

Being based on HTML5 (i.e. for the browser), projects made with Kaboom.js do have limitations – as our browsers and internet are only so powerful no matter which JS library we’re talking about. So, you shouldn’t expect to make any kind of AAA game with the library. Kaboom.js was also specifically made for 2D development, so 3D graphics are kind of off the menu as well.

Past these two minor limitations, though, Kaboom.js does not put any further obstacles in your way. You can build small games in just about every genre, and only your imagination is there to hold you back. This includes everything from platformers to adventure games to old-style retro games like Breakout, Super Mario Bros., Space Invaders, and so forth.

If you want to explore the full scope of what people have already made, you can check out Kaboom.js made games below: 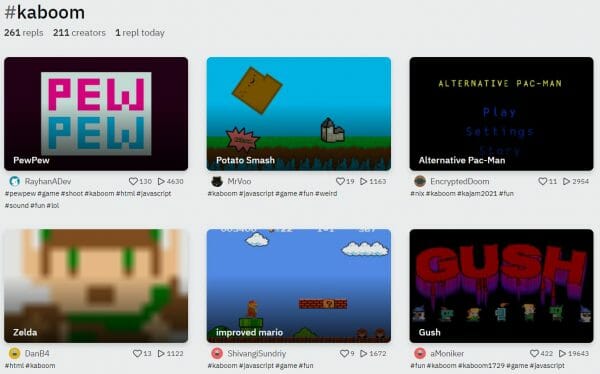 Ready to create games with Kaboom.js? Check out the links of tutorials below which cover Kaboom.js, JavaScript for HTML5 development, and the game development process.