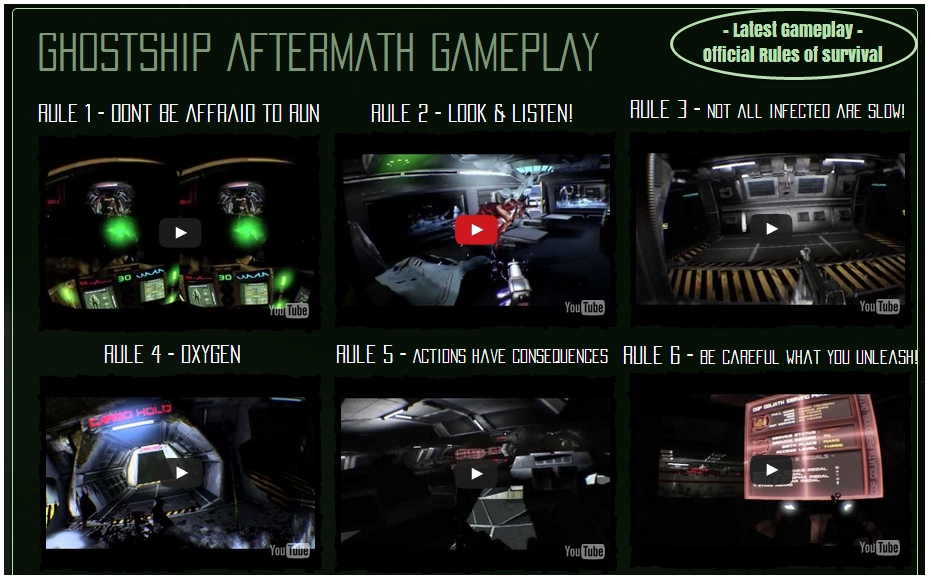 Shaun T Williams is a game developer inspired by sci-fi and horror movies such as Event horizon, Alien and Pandorum who has just created a futuristic survival horror interactive game. Sounds interesting, huh?

Ghostship Aftermath is the name of this game set almost 350 years in the future within the CDF universe (Colonial Defense Force).
In Ghostship Aftermath, you are one of a two manned team – ASET (Advance Scientific Evaluation Team) Who have been sent in as a primary evaluation team to investigate a possible infection. As a two manned team you must venture into the Icarus system where all communications have been lost for almost 2 weeks. The CDF Goliath is a war ship (Dreadnought Class) which has been sent to investigate the loss of comms with the Icarus system, she is now presumed a Ghostship.

As you find out what happened on board the CDF Goliath, a new story-line will emerge! one for your own survival! Be prepared for anything on board the Ghostship!

Inspiration was taken from sci-fi and horror movies such as Event horizon, Alien, Aliens, Pandorum, the thing, babylon 5 as well as games such as Aliens, Doom, System Shock, Dead Space, Natural Selection etc. Mixed with a free roaming gaming environment, perma death, random gameplay events and multiple storyline branches. Our game has many unqiue elements which makes surival horror just that! Your skill and survavl instincts are tested if you are to survive!

I am the solo developer of Ghostship Aftermath. I could not have brought the game as it is now without the help of a few great voice actors, music guys and Rama and Jordan who are the only others to lend a hand for a short time.

As a single dev, i can honetsly sya the pipeline was effiecient! Come october i would have released the second the game which again is totally different, unique and brings something new to SCi-fi FPS. So 2 games of this quality in 2 years has got to have some sort of record for a dev, but my main focus and passion is on the game, as you will see. After i get the time to relax and read some of the reviews then i can be proud of what i have acomplished in 2 years of literally “Hell”

Be prepared for the long haul! Have focus and passion and think outside the box!

The lauching of GhostShip Aftermath is just around the corner and you can visit the sites below to know more about Mag Studios and Shaun!