For fans who love the old arcade racing games and wants to relive that feeling of what the old 90’s car games had given them, well than Adrenaline Rush is surely one arcade game that you would love.

Adrenaline Rush was developed by Emil, an Indie Game developer from Romania who likes to write reviews of games. He describes his own game as “surely one of the 2D scrolling game that you would love playing.”

He believes that simplicity is the secret for success, so despite of the simple graphics, he’s added plenty of features that encourage the players to play and also give them a fun and entertaining experience for how long they chose to play. 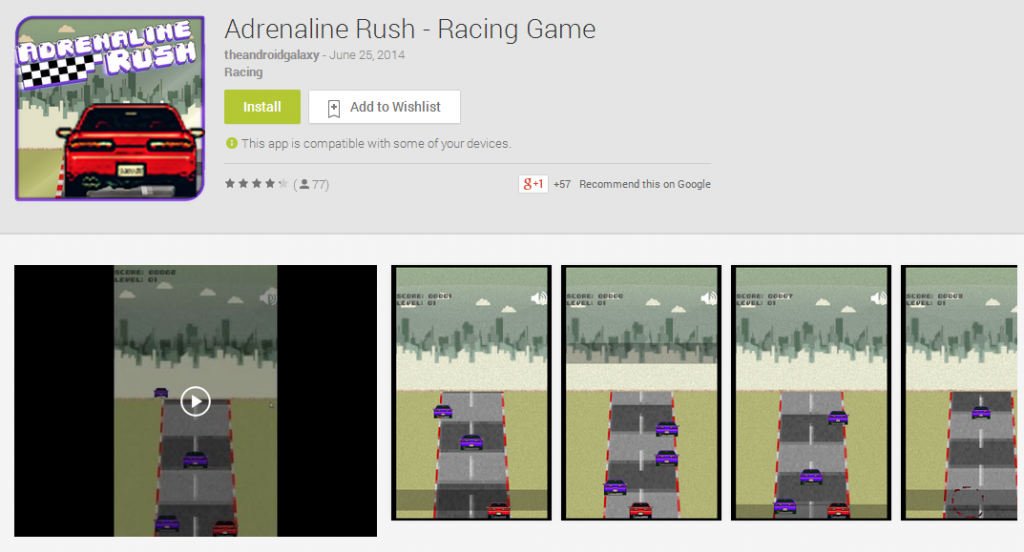 What can you tell us about the game?

Well as simple as the car game it is, it has it’s own short story. You’re in a classic car, we don’t know for sure what it is, we think its a Ford car, for some reason, but if you like another car, it can be the one which you want as well, so if you like Lamborghini, Porsche or an other car that was popular in the late 80′s and 90′s it can be that one. The important fact it is, that you are on a strange road with two bands, and your car runs wild along the road. You can’t stop the car for any reason, and your speed goes up and up and as you go through the levels, cars will run beside you fast and faster, at one moment you will also see all kinds of crazy police cars drive along with you. The only way to save yourself is by driving the car until you get to the final level, which for us also remains a mistery.

Start working on something, anything, no matter on how good or how bad is the idea, or the recourses you have at your disposal.

We want to thank Elim and invite you to check out just some of the features of Adrenaline Rush and, if you like it, remember to share this post 🙂

• 8 Achievements to complete;
• Awesome old cars including a police car which you can unlock;
• High score saving utility so you can show your friends how much you’ve manage to score and also challenge them to score better;
• Easy gameplay, you’ll just have to tap left or right for the car to move;
• Fun effects like explosions;
• Music and sound effects which mimics the ones that we’re used in retro fun games;
• is FREE to play!
Adrenaline Rush is surely a game that will put your blood in a rush. Join the race now and let us know how much you can score!