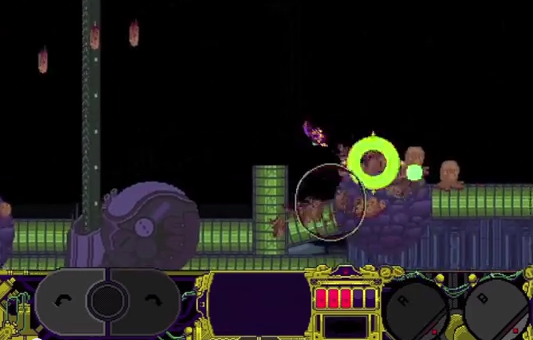 A husband-and-wife team that recently quit their jobs to make games full time. Is not a romantic comedy, It’s real life and the GameDev Academy is happy to welcome Hannah and Joe Williams for this interview on how to do #GameDev for a living.

Hanna and Joe love RPGs, fantasy, and lots of loot, and strive to make fun, quality games. That’s how Whalenought Studios came to life. Together they developed Bridge to the Moon a game inspired by Ayn Rand’s book Atlas Shrugged -one of personal favorites by the way-.

What is Bridge to the Moon about?

It takes a lot of orbs to build a bridge to the moon, and Cara’s in no short supply in this action orbital platformer. But before she could finish the job, the government and it’s fellow forces of society seized the bridge. Determined to reclaim her property and complete her interspace transit system, Cara isn’t afraid to cross paths with pterodactyl farmers, shrouded fanatics and destructive war machines.

The development of Bridge to the Moon started, and ended I suppose, with more of an experimental design. My wife and I came up with a basic idea and kind of continuing building ideas off that.

The project took about 6 months because we worked on it during nights and weekends. Overall, though the games has it’s flaws, as all first games must, it was a great learning experience in process, marketing and releasing an app.

Make a game design plan before jumping straight into development.

Make games you can and want to make. Even if you’re just toying around with engines and art, it can save you time even as a hobbyist to have a game plan for what software you’ll be needing, when you’ll need to know, and how involved your game design will be. That said, I see a lot of developers jumping on board with whatever is popular and just adding a gimmick to it.

I played the Flash game ‘crush the castle’ in like 2009, I don’t have a lot of interest in a game that replaced a catapult with birds, or the million of games that have some variant of animal being flung across the screen. Come up with original ideas that you would want to sit down and play. Find a niche that isn’t out there and see what you can do to fill it. Bridge to the Moon was a game I thought would be an interesting experiment, and something I didn’t see on the app store yet. Orbital platforming sounded fun, so I ran with that.

Right now Hanna and Joe are working on a 1998-style action RPG game called Isle of Bxnes. They’re about to send it out to their alpha testers for feedback, and are really excited about the direction the game is going. The art is beautiful and retro and the combat is fierce.

Good luck with your new project guys! And thanks for sharing your experience with the GameDev Academy.