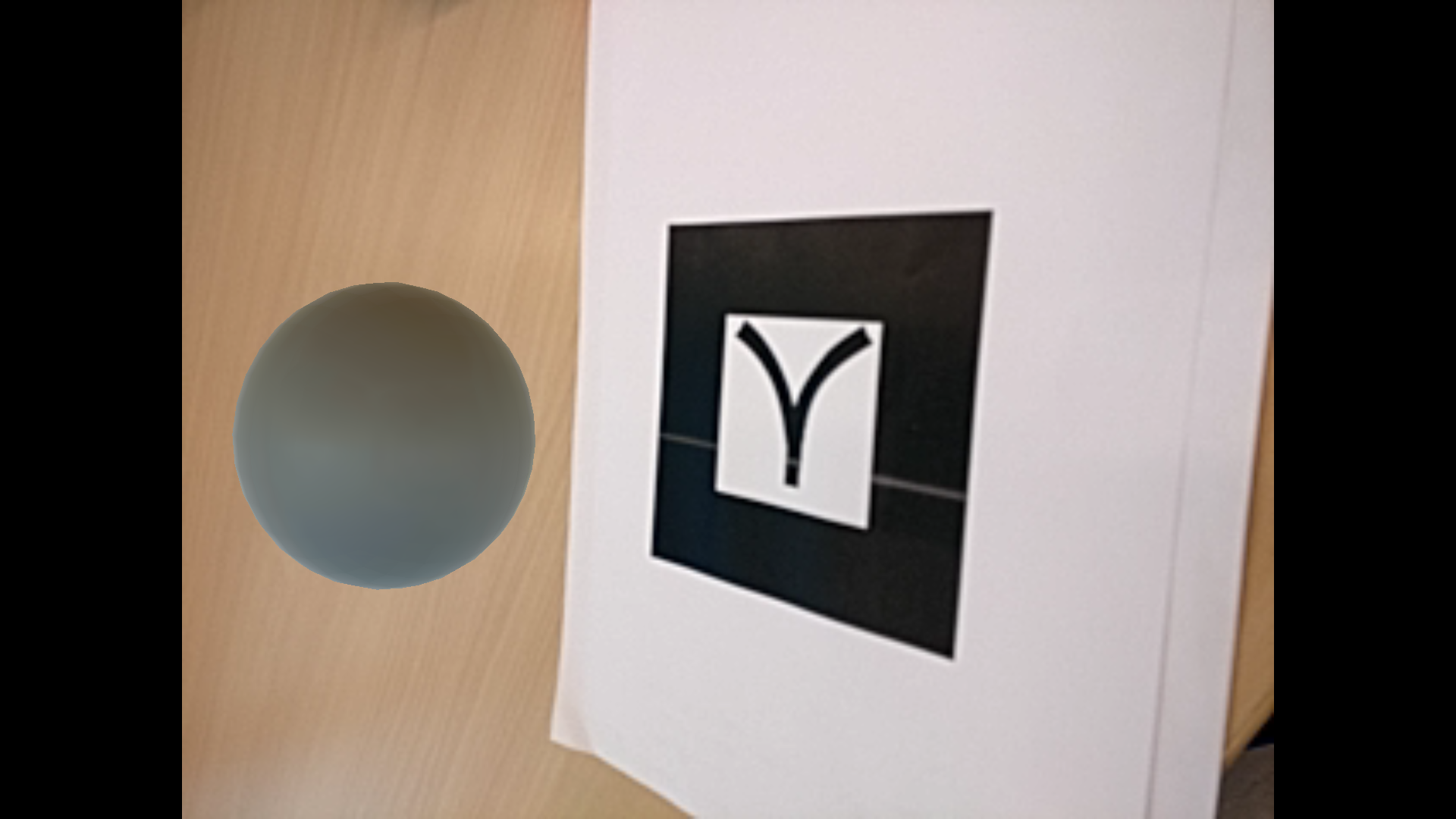 This first tutorial on augmented reality (AR) will cover the basics of making a personalised (digital) birthday card.

You can download all of the files associated with this tutorial from here.

AR is the process of putting digital content (images, videos, 3D models, …) on top of your surroundings seen through a device (such as a computer or mobile phone for example). What it basically does is use a camera as input and augment the stream from it with content not available in real life. As you can see in this image: 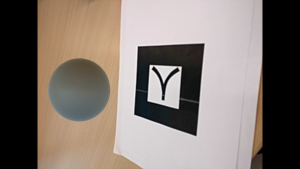 For this tutorial I’m assuming you have already installed Unity3D and downloaded the ARToolkit for Unity package.
I am using Unity 5.3.8 and the ARToolkit package downloaded from the website. More recent versions of Unity (5.4.x onward) gave errors when using the ARToolkit package. Doing the steps from this post on the ARToolkit github might resolve the issue but I did not try it so I cannot assure you it will work.
I will make an Android app at the end so make sure you have installed the ‘Android support build’ if you want to be able to digitally send the (birthday) card.

When starting Unity you will have to create a new unity project. You can delete the two objects that every new project starts with: ‘Main Camera’ and ‘Directional Light’ (right click and delete) since we will not be needing these objects. To use the ARToolkit package downloaded from the webpage you will have to import the package to your project: choose Assets -> ‘Import Package’ -> ‘Custom Package…’. 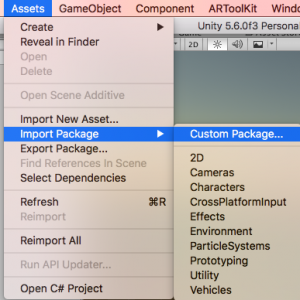 Next go the folder where you downloaded the ARToolkit to and double click on it. In the next window click on import to import the whole package. 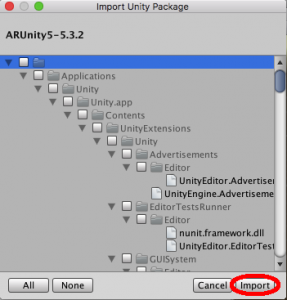 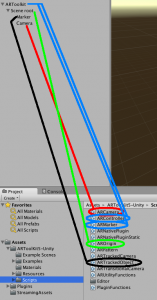 In the inspector window we will have to make some adjustments to the added scripts to get them working.
Select the ‘ARToolkit’ object, and if everything was added correctly the inspector window will have the components ‘AR Controller (script)’ and ‘AR Marker (script)’. In the ‘AR Marker (script)’ component write in the input box ‘Marker1’ (this is just a name so you can choose whatever you like). Make sure ‘patt.hiro’ is chosen at the pattern file and the width box says ‘0.08’.
Now select the ‘Marker’ object, if the script was added correctly the ‘AR Tracked Object (script)’ component should be visible in the inspector window. In the ‘Marker tag’ box write the same name as you did in the ‘ARToolkit’ object, in my case ‘Marker1’ (if you chose a different name use that one). If the name is the same in both under the ‘Marker tag’ box ‘Got marker’ should say ‘yes’ (if not make sure both names are identical).
The third adjustment we will have to make is in the ‘Camera’ object so select it. If you added the script correctly the ‘inspector window’ should have a component ‘AR Camera (script)’. In this component we will not have to change anything. In the (standard) ‘Camera’ component we will have to make a change though. In the ‘Culling mask’ dropdown box we must make sure we only have selected ‘AR foreground’ (click the dropdown box, click on nothing, then click the dropdown box again and chose AR foreground).
The last adjustments we will have to make are to the layers of the objects. The layer of the ‘ARToolkit’ object must be ‘AR background’ (when you choose this layer make sure you only change this layer, so click the ‘No, this object only’ button). Next click on the ‘Scene root’ object and change the layer to ‘AR foreground’. Be sure to change all its children’s layer to ‘AR foreground’ as well (click the button ‘yes, change children’).
If everything is done correctly this is how the ‘inspector window’ of the different objects should look like: 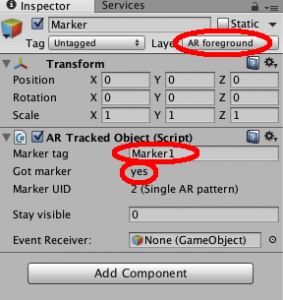 At this point everything is ready to make an AR app (be it for the pc or mobile phone).
Building the app at this point will look like it is not working. But what it does is put an empty object (the ‘Marker’ object) on top of the recognized pattern (patt.hiro: a black square with the word ‘hiro’ in it, you can find it here. If you want the other pattern ‘patt.kanji’ go up one step to the patterns folder of the github repository and choose ‘Kanji pattern.pdf’). The only thing we need is, to add an object as a child to the ‘Marker’ object. This is the object that will appear on the screen. As making (beautiful intricate) objects in Unity is not a part of this tutorial we will add a simple cube or sphere. Click the right mouse button and add a 3D object (sphere) as a child of ‘Marker’ object to the scene. Change the scale in X, Y and Z to 0.08 (the same size as in the width box of the ‘AR Marker (script)’ added to ‘ARToolkit’ object). You can always change the size to whatever you prefer later. Now zoom in to the object. If everything went correctly you will see a square (with the word ‘Marker1’, or whatever you named the marker, under it) and a sphere (or whatever object/model you added). 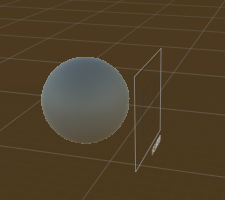 To make sure the object is projected above the marker move the marker in the negative Z direction to about -0.1 (or just type -0.1 in the Z box next to ‘Position’ in the ‘inspector window’). It is always possible to change this to the amount you want, but after some tests I found -0.1 to be a nice amount.
We are finished and ready to test it! If we push the play button the object will appear on top of the marker when we put the pattern in front of the camera. 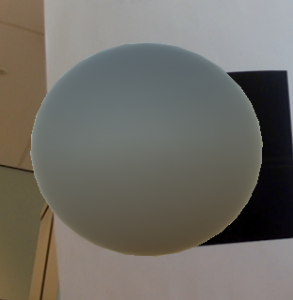 The last thing we need to do is make a nice mobile app. As I said at the beginning, make sure you have installed ‘Android build support’ in Unity, if not do it now! And of course don’t forget to save the scene!

The only thing left is to make a (birthday) card. You can make any card you imagine as long it has the marker somewhere hidden. Do not make the marker too small, otherwise it will not recognize it. Also make sure the black outer border of the marker is visible. As you can see in the video it works on a black and white (printed) ‘card’ and a full color card (although this one was on the screen). Also visible in the video is that it is not very stable if the marker is small. The closer you put the camera to the marker, the more stable the object appears.

Now it is time to make your own object and add it to the project instead of the ‘simple’ sphere in this tutorial. Make a nice (digital) card and sent it to whomever you want (and don’t forget to send the apk file as well 😉 ).

Files for the AR project (including test.apk)