Ben Burns & Alex Byrom, the Creative Director of Falchion Games tell us about how a chat between two friends turned into the game “Go To Hell Dave” in this post.

The story behind our company Falchion Games

My name’s Ben Burns and I’m one half of an indie studio based in Stoke-on-Trent, England called ‘Falchion Games.’ Myself and the other guy I started the business with, Alex Byrom, have staked the entirety of our savings, as well as a large chunk of our overdraft, on the gamble of making an adventure game called ‘Go to Hell Dave.’

We met at university while working on a little UDK mod called ‘iFrag.’ It was supposed to be a music-based multiplayer FPS, in which shooting on the beat would deal critical hits and as you achieved killstreaks, the tempo would increase, as would your opportunity for crits along with it. We had a whole bunch of classes such as the ‘rocker’ who was a heavy/tank, the ‘junglist’ who was a speedy DPS type of class and ‘doctor chips’ who was an 8-bit healer. It was a really cool idea but we were inexperienced and our naivety, combined with our over-reaching ambition, meant that the project never really got beyond the stages of technical demos.

As I was approaching the end of my academic adventure, it became apparent that even if I did manage to bag a job in the industry, I would have almost no creative control over what I worked on. I’d had this idea bounding about in my brain for years and this idea eventually became ‘Go to Hell Dave.’ I’d always had a keen interest in theology, especially the hierarchical nature of heaven and hell. I got thinking about what hell would be like if Satan simply abdicated. What all of the demons and the damned souls do without anyone to order them around? Thus ‘Go to Hell Dave’ was born, a story about a normal guy who dies and ends up in a version of hell where it’s inhabitants had carved out their own bizarre society and effectively turned hell into a giant council estate.

My years of writing campaigns for D&D, Shadowrun, Warhammer RPG etc. had left me with a fairly decent grasp on how to craft narratives and create memorable characters, so I approached Alex with the idea and we decided to set up our own studio and start working on the game full time.

As individuals, Alex and myself had a specific set of skills that were useless, but as a team we basically made one all-round ‘jack of all trades’ developer. Alex can edit sprites, design levels and animate. I can edit audio, program and work in the engine. We began coding the game in our bedrooms but found that the lack of regular, face to face communication was hindering our progress, so we leased an office in the most bizarre place imaginable. We now work in the ‘creative village.’ It’s basically a giant warehouse in Stoke-on-Trent and we’re surrounded by people making ceramic ornaments, wood carvings, war figurines, t-shirts and pretty much any kind of creative endeavor you can imagine.

We started a Steam greenlight project and began spending all of our time working on the game and attempting to get exposure in the community.

Thanks to our love of adventure games and our genuine belief in what we’re doing, we are finally nearing a point where we have a playable demo. I’d like to think that what we’re doing proves that you don’t need ten years of industry experience or a £20,000 budget to follow your own path in this industry. But we’re not quite there yet. We’re about to launch a make-or-break Kickstarter project which will garner us the money we need to finish the game.

What is “Go to Hell Dave” about?

Dave was just a normal guy with a typical life until he smashed his car into a lamp-post, with his girlfriend Sharon in the passenger seat. Waking up at the gates of Hell, Dave discovers that his girlfriend has gone, Satan is missing and Hell has become a dilapidated mess.

‘Go to Hell Dave’ is a hilarious adventure in which you will take Dave on a tour of Hell’s nine floors, none of which you’ll have ever read about in the Bible or the Divine Comedy.

In GTHD we like to poke fun at the world around us so expect jokes on the frequency of cliches in video games, Sewer levels, invisible walls. NPC who will stand and not speak. Lots of 4th wall breaking.

We have a lot of weird and wonderful characters planned, a grimreaper who is topping up his tan “he is off the reaping and on the the relaxing”. In a later level we have a host of stereotypical nerds playing an unofficial version of D&D “a man snatches your handbag, do a saving throw”. 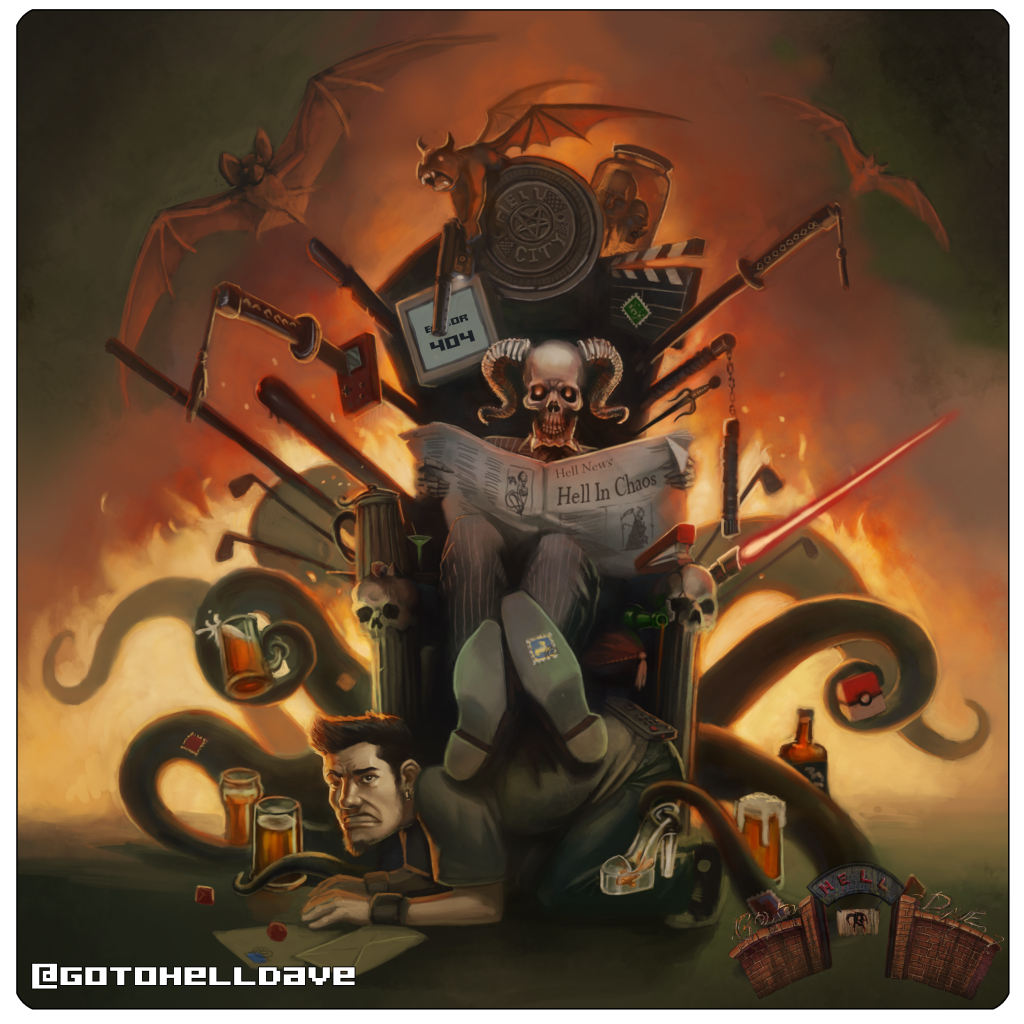 In addition to some strange puzzles, having to order zombie take out from a drive through window, having to dress up as a stripper and working out what to do with a classic copy of final fantasy.

A lot of our ideas extend from what if Hell was based off British culture, so you have quite a lot of rude people Dave is as Sarcastic as Archer from the FX show, in addition to taking a lot of cue from British Cinema and TV, stuff like monty python, black adder, doctor who, read dwarf, spaced and the dry wit of Stephen fry.

What plans do you have on publishing?

In an ideal world I would love GTHD to be on everything, our prime target is PC and Mac, I’d love to have the chance to get it on PSN, and XBLA or onlive even phones and tablets. To be honest anything is possible with a bit of redesign. I’m very much of the opinion I want to get our game in front of as many people as possible. But it’s all about who you know.

It’s currently took 12 months+ our team consists of 2 in house workers and 2 freelance workers. we plan to have 4 freelance workers in the future. and we are always looking for passionate people to join our team. We have big plans for Go To Hell Dave, there is still a possibility of crowd funding but keep an eye for us.

Never underestimate the power of contacts and multiply time it will take by 3.

Thank you guys and good luck on the process of publishing “Go to Hell Dave”.