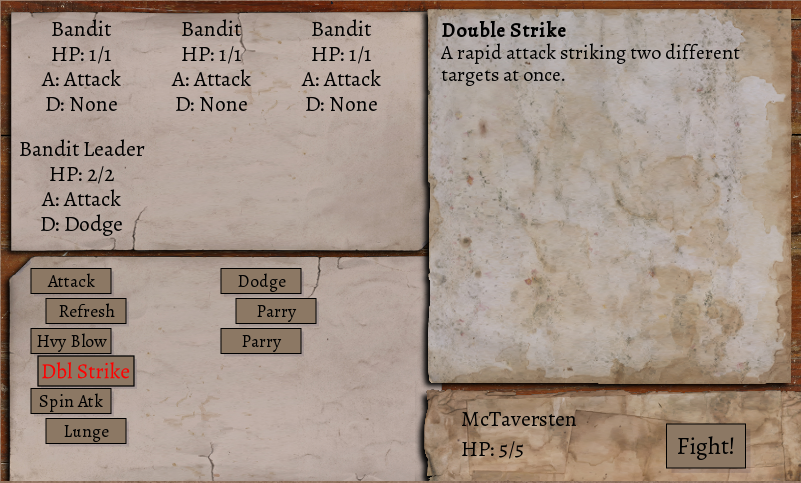 Let’s get to know Nicholas Guttenberg “The Hermit” a little better. In this post he talks to us about the creative process of his game Travelogue.

I’m a physicist trying to get into making games in my spare time. Urban Hermit Games is a four-person studio in Oregon – we’re all friends and trying to see if we can make this work. We picked the name Urban Hermit Games because of an idea to make something like the opposite of an MMO – rather than immutable worlds that you explore with others, the games are highly mutable worlds that respond to how they’re played, but you only ever see the other players (the city around you) in the form of their effects on the game world.

Travelogue  is an RPG/exploration game. You travel to various places either taking mercenary jobs, selling trade goods, or just finding new paths, and all sorts of things and side-adventures can happen on the way. Its a very sandbox kind of thing – while there are three main quests you can choose between at character creation, other unrelated things happen at certain times over the course of the in-game year and you can interact with them, change their outcomes, or avoid them as you like. 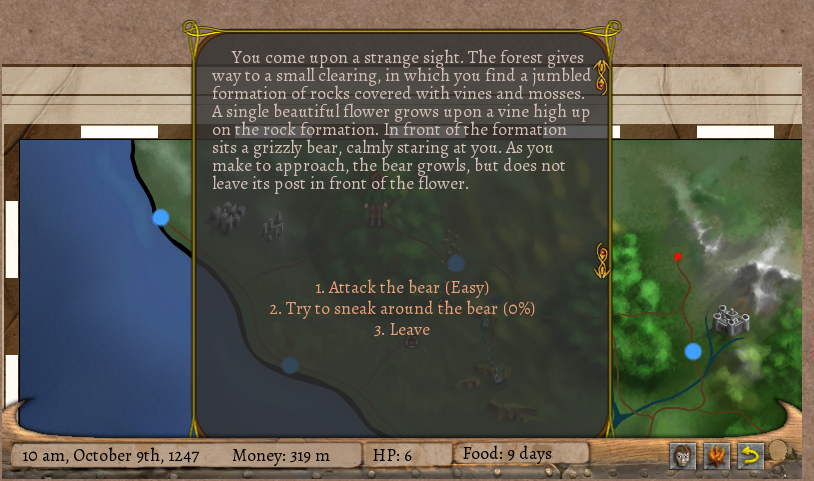 We came up with it over dinner at a local bar/restaurant as something that’d be easy to write for in a modular way. The map exploration game style is somewhat based on the old Realms of Arkania games.

One of us has mostly been working on getting the infrastructure for the company’s web presence, advertisement, etc going on, but she’s also been giving a lot of feedback on design choices, art and music quality, suggestions, and the like. For myself, I’ve had to do a pretty wide range of things for this game, including things I’m not that good at yet – the aforementioned music and art, for example. Our other two developers have been writing events, which is really the time-consuming part.

I’m happy to say we’ve just recently hit 100 distinct events in the game, and most of the main content is done, so we’re on track to release the game some time in September. Of course, beta-testing may well through a wrench in that plan.

There are lots of compromises to be made in interface design and the like if you want a good mobile experience. You have to consider display sizes, whether buttons/etc are too small to touch accurately, etc.

Don’t worry too much about the engine. Making the engine is only 10-30% of the development time. Its really not the big deal. The rest of the time is content generation, and that can be a slog if you don’t have people to bounce ideas off of and to maintain interest in the process. I spent the first month making the engine, graphics, and music, while I’ve spent the last two months just writing the text for events for the game (which is the same thing our two other writers have been doing, so thats basically 6-to-1).

What was your experience in the beta testing process and how do you think we could make it easier for you on your next game?

With the small group I can just push an update and say ‘hey, I have a new dungeon’ and I can kind of fix bugs interactively as I find them. A larger group will find more, but I think it’d be more asynchronous, more like slogging through a list of fixes than seeing someone be excited about the game.

Thank you Nicholas for sharing your experience with the GameDev Academy!