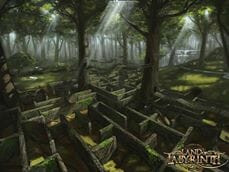 Marc Echave, Fabien Rixens, Paulo Milanez and Bradley Anderson form Huracan Studio, a new independent video game company but whose members have been around in the video game industry or computer graphics for a while.

They’re responsible for the “Horror fans dream come true” game Terrordrome: Rise of the boogeymen and had gained a certain trust from its followers regarding dedication and quality. Now they bring Land of Labyrinth and want to share it with us at the GameDev Acadamy.

In Land of Labyrinth, you are Sven, a young adventurer in search of his disappeared father, who must travel throughout a series of huge levels structured in form of mazes. Each one of them is unique in its style and complexity. But finding the exit is not the only difficulty as you will encounter various sorts of creatures that inhabit the labyrinths, some are dangerous, others might help you. Fortunately, you will be able to make use of magic potions, special weapons and other useful Items along the way. You control the main character in a 3rd person perspective. You can explore and collect different kind of objects along the way, Find secret places that hide valuable items, fight numerous enemies or avoid them by hiding and sneaking them out. At the end of each level you will encounter the guardian of the level, basically the final boss that you will need to defeat in order to progress to the next labyrinth. Until you reach the final Labyrinth and fight the Master of Labyrinth himself.

Land of Labyrinth will challenge your orientation and memory as well as your ability to solve puzzles, find secrets and put your fighting skills to the test. The game uses arcade and some RPG elements to provide the best labyrinthic experience in video games. We will primarily focus the development for PC and Mac and will also consider Linux and Android (Ouya) platforms along the way. It is powered by Unity 3D engine.

I’ve always been fascinated with mazes and labyrinths since I was a kid, I use to draw complex labyrinths in a notebook and challenged members of my family or friends to solve them out. When Jim Henson’s movie “Labyrinth” came out, I was immediately mesmerized with it and it was indeed a big inspiration for making this game. Also I found no equivalent game in the market, there are indeed lots of dungeon crawler games out there (the closest kind of game compared to LoL), but nothing that really reproduce the feeling of actually being lost in a giant maze. I wanted a game where the main goal remains finding the exit, with dead ends and few cues, where you have to rely heavily on your orientation to find your way out. There are other strong influences directly coming from fantasy literature, movies like “Legend” and “Willow”. A trendy series of game books in the 80’ which has a maze-like structured story and Greek and Northern mythology. Games like Golden Axe, Rastan Saga for their efficient arcade gameplay and Skyrim for the aesthetic.

I went full time indie beginning of 2013 and started the development of Land of Labyrinth at that time.
I started creating the graphical assets and modeled some characters, I’ve made almost all the animations set for the hero and for some of the ennemies. I’ve worked alone during the first 8 months and then contracted a freelance programer to help me to integrate everything in Unity. The progress was considerably slowed down when my son was born and during the next 6 months.
Eventually I ran out of personal financial ressources last month so I had to find a job and I’m back to work on the game on my spare time. The game is still on development stage.

Land of Labyrinth is not the first game I made but you always learn new things with new projects, specially when each one of them is different. I have never worked on a medieval/fantasy game before so I had to make lot of research on Medieval architecture and design, what was the people loved the most about Fantasy universe.
The first level also served as a prototype and as I was building it I learned lot of things about level design and the possibilities my game had to offer to the player in term of gameplay. It soon became clear that this could be an awesome game, not just only a maze game but also a great adventure experience.

I think it’s important to distinguish what is your goal when doing games. If it’s as a hobby it might be a great way to learn the development process and from there to know if you would like to venture further or not.
If you intend to make a living off of it, then keep in mind doing video game is serious business and is not only about just doing games, it’s about doing many jobs at the same time, doing things that you may not like but that you will have to deal with, it’s about entrepreneurship, management and keeping your passion and family alltogether. Are you up for the challenge?

We want to thank the guys from Huracan Studio for a great interview, and also  want to share a last thought of them with all you GameDev readers:

Independent games are a great source of creativity and freshness whereas the big companies have somewhat lost their soul along the way. Let’s hope the indie game devs scene continues this way and won’t fall into the dark side of greed and corporate when they eventually get to the top. Le’ts make this a family, not only a marketplace.

What do you think??