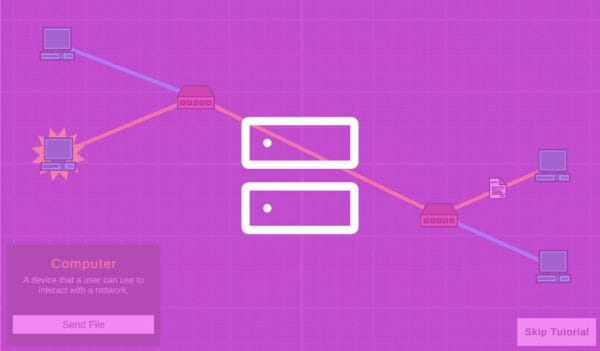 You can access the full course here: JR CODERS – INTRO TO NETWORKS

How Does the Internet Work

When using the Internet, we’re both sending and receiving packets over the network.

It’s important to know that there are different types of packets, they are not all the same. These are known as  Internet Protocols. A common one on the Internet is the HTTP (Hypertext Transfer Protocol). This protocol is used to transfer web pages across the Internet, while the FTP (File Transfer Protocol) is used for transferring files across a network (e.g., to upload files to a server).

The TCP (Transmission Control Protocol) and IP (Internet Protocol) are the ones we use to define how the data will be sent. IP is responsible for establishing a connection between two devices, then TCP is in charge of sending the data across the connection:

Say you want to open up a website on your computer, here’s what is going to happen:

And that’s how communications are established and held over the Internet.

When using the internet, we are both sending and receiving packets over the network. It’s important to know that these packets are not all the same, there are different types. These are known as internet protocols and determine how data is sent across the network.

When using the internet, a common one is the Hypertext Transfer Protocol, also known as HTTP. This protocol is used to transfer webpages across the internet.

FTP, which stands for File Transfer Protocol, is used for transferring files across a network, okay, so if you wanted to upload some files to a server, you would most likely be using FTP.

Now, this is how we define the data. TCP/IP, which stands for Transmission Control Protocol and Internet Protocol, is what we use as the means of transmitting that data.

IP is responsible for establishing a connection between the two devices, then TCP is in charge of transmitting that data across the connection. It works like this. Let’s say you want to open up a webpage on your computer.

A connection between you and the server is defined by the IP, then the TCP chops up that webpage into a number of different small chunks and sends them over via packets. Your computer can then read these packets and form the final webpage.