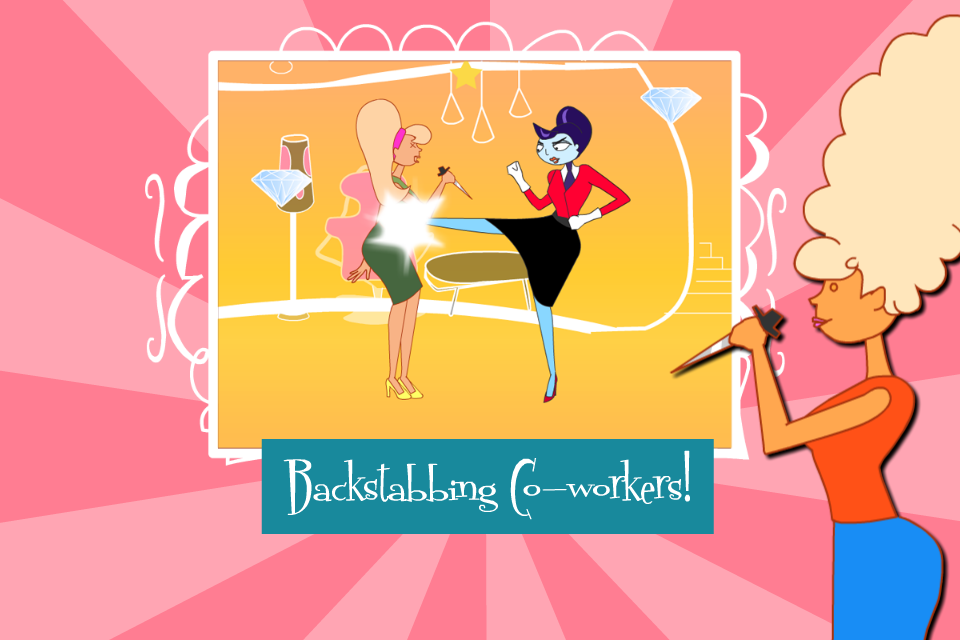 At the Game Dev Academy we believe it’s easier to achieve your goals when you get to know people who are currently doing and are passionate about the topic you are interested in, and for that I would like to present our interview to Maura Sparks, founder of Kissappgames, startup based in California that publishes casual Apple iOS games for women and girls.

Maura and Wendy created a game called Glass Ceiling, which is not only fun to play but it also offers a sharp satirical view of today’s society.

Thanks Maura for joining us today.

What can you tell us about your game Glass Ceiling?

Glass Ceiling features the heroine, Moxie, fighting her way up the corporate ladder as she tries to break through the glass ceiling. It’s no easy feat as she battles fresh men, backstabbing co-workers, asinine accountants, bad bosses and other office stereotypes in her quest to reach the top.

Glass Ceiling is a side-scroller action adventure game. It’s an interactive cartoon with beat’em up mechanics. Each level represents a floor in an office building. Moxie, a smart-minded career gal, starts out in the basement and works her way up the corporate ladder encountering multiple foes on her way to the top. Each floor is filled with floating objects for points, life-force battles and tricky obstacles. On mobile devices, the game features a touchscreen control system. You simply tap and hold in a direction to walk, tap enemies to attack and defend and tap to grab items. Easy to play, fun to explore, Moxie will ultimately discover what lies on the other side of the Glass Ceiling.

Glass Ceiling will appeal to anyone who has worked in an office environment, although it will resonate more loudly for women. This is the first mobile game to tackle this topic. The app takes a satirical approach and sheds light on a serious topic in a fun way.

What was the hardest part when making this game and how did you overcome it?

The hardest part about making this game was the timeline. We’re not young kids and so we were all dealing with other life responsibilities (families, mortgages, work). We all had to take on other jobs during Glass Ceiling’s production. Also, during period the market went through several changes. The freemium market arrived, in-app purchases grew and the monetization players and issues evolved. With Glass Ceiling, we released the app for $0.99, but we may offer it for free for a weekend and play around with the pricing structure.

After making this game, what would you recommend to people who want to create games?

Go for it! Choose an idea that resonates with you. When Wendy approached me with this idea, I loved it immediately. However, my decision to do this app and start Kissappgames was probably different than Wendy.

Wendy says, “It was clear that there is a market for games for women/girls. We didn’t want to exclude anyone but thought it was a good idea to make a games for ourselves – you know, games that we would like. The issue of women being treated equally in the workplace, and commanding top positions does seem to be in the social conversation. I’ve worked in the games industry long enough to remember a time when you couldn’t have a woman protaganist in a game, so to me a prim woman, styled in the 50’s UPA style, punching people was funny.”

I wanted to take control of my career and starting a company is one way to do that. Starting Kissappgames gives us the opportunity to create our own unlimited future. Having your own company removes the glass ceiling. It allows me to interact with amazing, smart people, take ideas and run with it, address things in a creative way and be part of a very dynamic space that is constantly moving. It’s clearly not for the faint of heart. I just hope we can build our brand and Kissappgames becomes a company that continues to build cool apps for girls and women.

I had a game company before and we made CD rom games–I rode that arc. I loved the mobile space the minute it arrived because now small teams, with low overhead could release a game without having to create packaging, work with expensive distribution channels, and spend tons of money marketing. If there was a bug in the software back then you were doomed. Now we can release an app, iterate as needed, use social media to create a viral marketing buzz, have direct contact with our community and compete with companies 30x our size!

Thanks Maura for giving this interview, we wish you the best of success with your company and projects!