Phaser is a fast, free, open source HTML5 game framework for desktop and mobile. Phaser 3 is the next generation of Phaser framework with many new and improved features, fully modular structure and new custom WebGL renderer. In this tutorial we will use Phaser 3 to create simple Mario-style platformer game.

The goal of this tutorial is to teach you how to build a platformer games with Phaser 3. You will learn how to:

The assets used in this tutorial are created by Kenney Vleugels and can be found at www.kenney.nl. All assets used are public domain CC0 licensed.

You can download the tutorial source code and asset files here.

In Phaser 3 a config object is used to configure the basic functionality of a game. The config object can have a lot of options, but for now we will add only the most basic ones. Width and height define the size of the canvas element that will be created. The type property is for setting the type of the renderer for our game, I will set it to Phaser.AUTO. In this case Phaser 3 will try to use WebGL, but if it can’t for some reason, it will use Canvas. You can change this option to Phaser.WEBGL or Phaser.CANVAS for corresponding renderer.
Now we will create simple Phaser 3 project with only the default scene and we will implement three functions:

For our Mario-style platformer I will use Phaser 3 arcade physics. To enable it from the start, you need to add the physics property to the config object:

Very fast and really straightforward way to add physics system to a game. Also, I’ve added a gravity property to it that will work on our player sprite. So here is our empty, but fully functional Phaser 3 project with arcade physics enabled:

Now we need to load the assets into the game. Phaser 3 comes with nice loading functionality so you just need to add your assets in the preload function and the engine will automatically load anything defined in it when started.
Here is how our preload function should look:

This will load four assets – our map made with Tiled Editor, a spritesheet containing our tiles, a coin image and the player animations in an image atlas.

Running the game now will show only black screen, as we haven’t added anything to our scene.

The map for this tutorial is created with Tiled Map Editor. You can create your own map with it or use the map that comes with the source files for this tutorial. Our map has two layers – one for the ground tiles, named ‘World’ and one that contains the coins with the name ‘Coins’. The map should be exported in JSON format.
Now we need to add the map to the scene. Add this code to the create function:

We will need the last two rows to limit the movement of our player and the camera later on. We don’t want to lose the player sprite outside the game screen so we make the world limited to the layer size.

Great, now we have our game world ready. Here is a screenshot of how it should look: 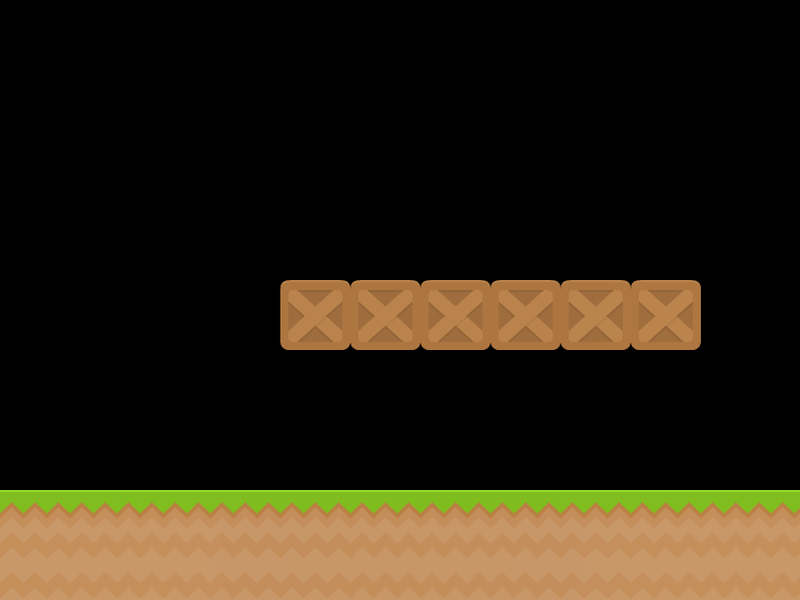 Its time to add the player sprite. Add the code bellow at the bottom of the create function:

You will see that we are not just creating a sprite, but we use the Physics Game Object Factory to make our player so it has dynamic physics body added to it from the start. Then we set a bounce property to it and make the player collide with the physics world bounds.

When you check the game in your browser you will find that we have a problem. Our player don’t stay on the ground, but falls through it to the bottom of the game. The solution of this problem is to add collision with the ground layer. Here is how you do it in Phaser 3 style – add this code at the end of the create function:

In Phaser 2 you add your check for collisions during update, but Phaser 3 makes it automatically with the Collider object.
Now we have the player collide with the platforms and we need to make it move when a key is pressed. For this game we will use the arrow keys of the keyboard. Phaser has a build-in keyboard manager and it is a good choice for our platformer.
Add the code bellow at the end of the create function:

Now the cursors object is populated with four Key objects: left, right, up and down. Here is how we can use them to check if a key is pressed in our update function:

As you can test now the player sprite can move and jump, but the camera stays still. Making the camera follow the player is very simple, you just need to call the camera startFollow method. Also we will want to stop the camera from exiting the game world so we will use its setBounds to limit it to the map size. Add the following code to the create function:

Now we have another problem – our player moves left and right and jumps, but there is no walk animation.
Its time to mention that the ‘player’ is loaded as texture atlas, that is a combination of images in one big image. In our case the player atlas contains walking and standing frames of our player character. Its is not in the scope of this tutorial to explain texture atlases in details, but if you are not familiar with the term, I recommend you to research more on it now.
For the walk animation the atlas contains the frames ‘p1_walk01.png’, ‘p1_walk02.png’ … to ‘p1_walk11.png’. To make simple walk animation from these frames we need to define it this way:

First the key property is the name of this animation. Next we need to add the frames for it, in our case we use the function generateFrameNames to add all walk frames easily. The repeat property set to -1 tells Phaser to loop this animation. The frame rate property is pretty self explanatory.

I won’t use two separate animations for left and right movement, instead I will use only one animation ‘walk’ and I will flip the player. Flipping is done with the player.flipX property. Here is how the update function should look now:

Its time to add something to collect – the coins. We will add another dynamic Tiles layer to our game world:

Now the coins are visible, but we need to be able to collect them. Add this code to the create function:

The function setTileIndexCallback can be used to invoke certain actions when the player touches some tiles.

Here is what your create function should look:

Now we need to implement the collectCoin function. In it we will remove the tile that represents the touched coin. Here is the code for it:

Lets add score variable and a text to show how much coins we’ve collected.
Add this at the top of the game near the other variables:

And this at the end of the create function:

Here we create a Text Game Object with font size of 20 and white color. We set its scroll factor to 0; this tells Phaser to fix it to the screen. Now when a coin is collected we can increment the score and set the text to show it:

With this our very simple platformer is ready. From here on its up to you to develop it more and explore the possibilities. 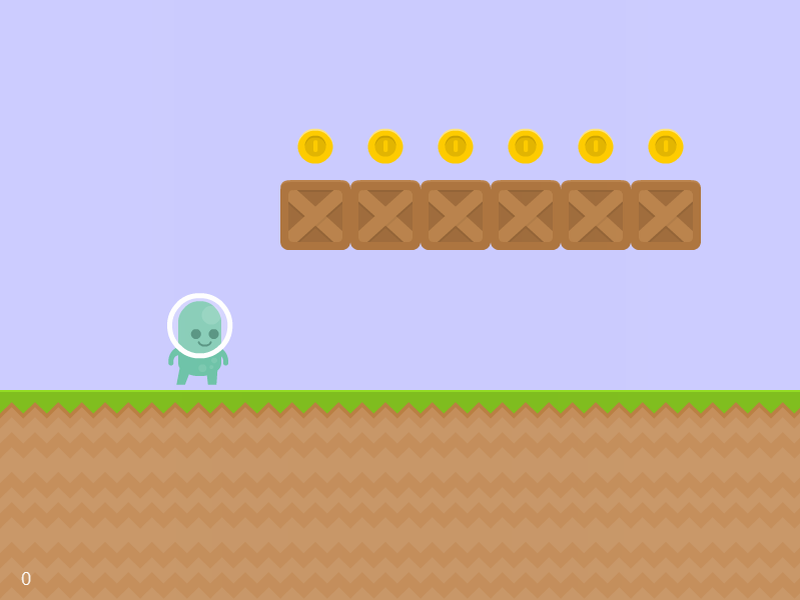 In this tutorial you learned the basics of creating a Mario-style platformer game like creating the world from a map, adding sprites with physics, controlling the interaction between physics objects. There is a lot more that can be done, for example adding a paralax background, creating a bigger level, adding more collectable types and some enemies. With the experience from this article you can now try to develop your own platform game and expand it a bit with some of the above functionality.