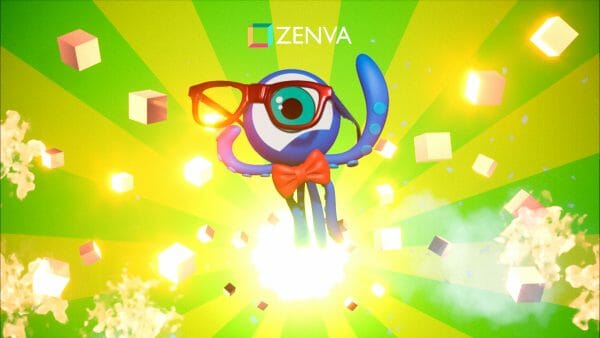 You can access the full course here: Explore Storytelling for Games

In this lesson, we will go over the Three-Act Structure. It is most commonly seen in movies, since it’s a short, around 2-hour long story. Structuring it in three different acts is generally the way most movies go.

Even games that are heavily story-focused generally follow this trend.

What is Three-Act Structure?

The Three-Act Structure is a model to structure a story in three acts. 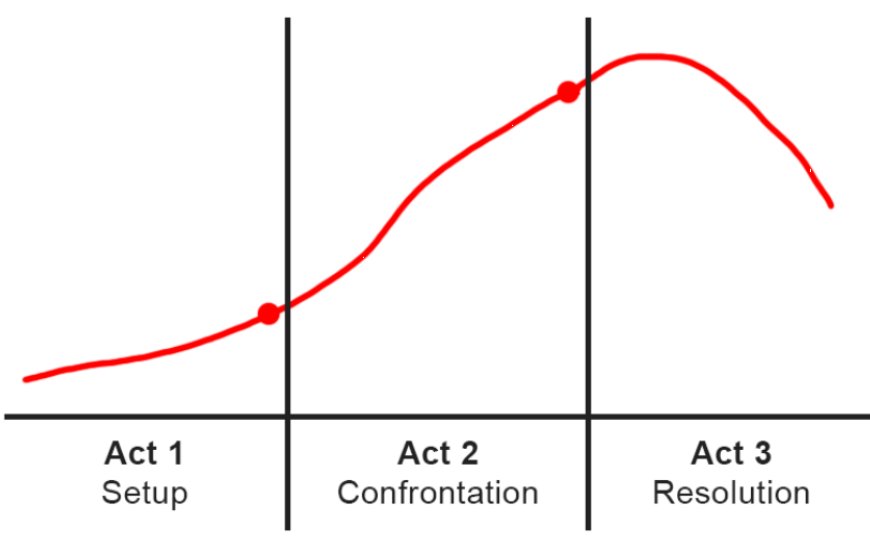 Half-Life 2 is an action-adventure game set in a sci-fi universe. Let’s see how it fits into the three-act structure. 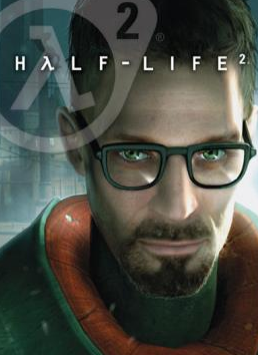 During Act 2, Gordon reaches the resistance base and meets up with new members.

If we were to plot out this structure via the image we showed before, it would look something like: 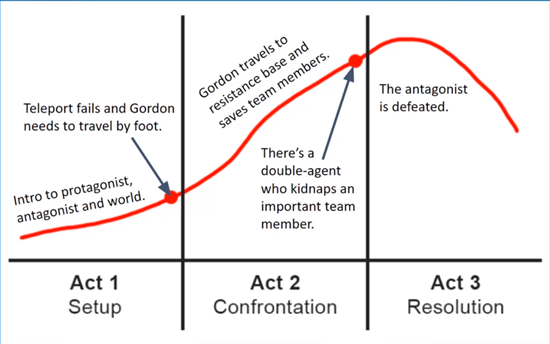 Midpoints of the story are often used to change the current path of the story and add increased stakes or tension, and can be found in many different storytelling mediums. Some of the tactics used are:

Using “Half-Life 2” again as a reference point, at the midpoint of the story Gordon finally reaches the resistance base. However, the base is unexpectedly attacked, and Gordon is forced alone and his plans change. This not only changes the course of the narrative, but also adds new stakes to the board.

In the next lesson, we’ll start exploring storytelling methods.

Hey, everyone in this lesson we are going to be going over the Three-Act Structure. Now in all forms of media we can actually find the three-act structure, all right. Most commonly seen in movies since it’s a short, around two-hour long story, structuring it in three different acts is generally the way most movies go. And even games that are heavily story-focused, also generally follow this trend.

Now in most forms of media act two is generally the longest. That normally takes up most of the movie, I’d say around 70% of the movie. Then set up is probably the second-longest, and then resolution is normally the shortest, especially in games, the resolution, or the act three, is generally the shortest as that’s most of the time, you know, the boss fight or the final confrontation to defeat the enemy of the game.

So, this is what it looks like jotted down. And this red line represents the tension and the buildup over the story, okay? So in act one, the setup, this is where, you know, the player is being introduced to all these various different things in the game world. maybe the antagonist pops up.

And then through act two it rises. So we have the tension rising right up to the tip, which is known as the climax. And the climax is where our protagonist and antagonist meet and the final fight happens, or the confrontation of the story is resolved. Okay, and then the tension goes down, everything is, you know, wrapped up and the story ends.

So, let’s look in a bit more detail on what each of these acts do, and how they go into one another. So if we’re in act one, how do we then go into act two, and then how does act two go into act three, okay? So, act one, the setup. So this basically involves setting up the characters’ world and even the antagonist, okay?

Now the inciting incident is basically an event that kick-starts the story, okay? What is your story and what causes those events to happen? And this is where the situation changes and the players’ goals for the rest of the game are established, okay?

Now and act two is also known as rising action. So we have the tension, we have the buildup arising across act two. And this is where we find the protagonist trying to solve the conflict, okay, the conflict of the game, conflict of the movie. This is where the protagonist is basically trying to solve the issue that has occurred in the world. Is there a villain that needs to be taken down? Is there a mystery that needs to be solved?

And act three, resolution. This is where the story and subplots are resolved, okay? This is where we wrap everything up. The conflict is solved, questions are answered, and it leaves the protagonist and other characters with a new sense of who they really are, okay? So this is where your character arcs basically come to their conclusion. And these characters who changed who they were throughout the story finally come into their final form, all right?

So, we’ve got no idea of act one, the setup, act two, the confrontation, and act three, the resolution. Now how about we get an actual example of this? And I think a great example is “Half-Life 2” because if you play for “Half-Life 2” you probably have a general gist of what the story is. And in fact “Half-Life 2” actually follows the three-act structure. Now, of course, if you haven’t played “Half-Life 2” or you don’t wanna be spoiled then I recommend you probably skip this part as we are gonna go over pretty much the entire story of the game, okay?

So let’s see how this fits into the three-act structure. In act one, we are introduced to the protagonist, Gordon Freeman, and we get introduced to the antagonist, Dr. Breen, okay? And these two things happen quite early on at the very start of the game. And we then also introduced to the world, okay? We are let out into the open to explore the city, see the sites, understand what is going on. And we come to the understanding that this is a heavily controlled police state, okay?

We understand that straightaway from how the game is presenting all this information to us. And as the story continues, Gordon escapes the Combine, which are basically the police, and hides away with a resistance group, all right. Now the inciting incident is that Gordon attempts to teleport to the resistant base, but it fails, and that means basically he must get there on foot, okay?

Things have changed. The inciting incident has kick-started the story, okay? We need to get to the resistance base but we have to get there on foot, which is of course a lot more dangerous and will send us on our journey. And that kick-starts us into act two.

Now in act two, Gordon goes through the game, he reaches the resistance base and meets up with new members. Now they are attacked and some of them are taken away. And Gordon’s objective then is to break into their prison and reunite of them. Now, what is the plot point that changes the game and sends us into act three?

Well, that happens when a member of their team is actually a double agent and they teleport away with an important team member. And that means, okay, tables have turned, we now have an objective that we need to do, which sends us into act three, where we finally confront the conflict. And basically, Gordon and the team break into the Citadel and fight their way through, okay, until they confront and defeat the final antagonist, okay?

So this is a pretty classic three-act structure. We have act one, where we are introduced to the characters, the world, and we have the inciting incident. So we have the journey, basically established. Act Two, we are gone for the game. The conflict is becoming more present, and we then have the plot point which basically requires the players to rush, requires the protagonist to get to the conflict and face it as fast as they can.

And that happens in the third act when basically we’re up to the final level, we’re fighting through the Citadel, and then we come out at the end, defeating the antagonists. All right, so that is a look at the three-act structure in “Half-Life 2”.

And this is what it looks like on that chart before, okay? We have our two plot points, the first one being in act one, and the second one being in act two. And also the general trend of just how the tension rises throughout the game. And then finally, when the antagonist is defeated, that goes down as we have finished the game.

Now, the midpoint, if you watch a lot of movies, and you go to the middle of the movie, most of the time there will be something that changes the conflict, or changes the story in a way. So the characters might need to go about confronting the conflict in a different way. They may be set back a lot. There may be a twist introduced.

So I recommend you go and look for a few of your favorite movies, go to the middle of the movie, and just see what is happening at that time. And how do those events change the story, okay? Because most of the time, or a lot of the time, you’ll notice that the midpoint of the movie is very important.

And the same thing goes for “Half-Life 2”, the halfway point of “Half-Life 2” is of course in the second act when Gordon reaches the resistance base and they are attacked, and he is forced to go along another path alone, okay, the plan has been changed. He’s objective, what he was expecting to do has been changed, the tables have been turned, and he now needs to go along a different path that is more dangerous, okay? So that is the midpoint of “Half-Life 2”.

Now as a bit of a challenge I want you to think of a game you’ve recently played or know of, and make sure it has a storyline, okay. Make sure it’s fairly story-focused. And I want you to think of these three things. Does the story follow the three-act structure? What was the inciting incident? And what plot point kick-started the third act? Okay, so go for that. And thank you for watching.