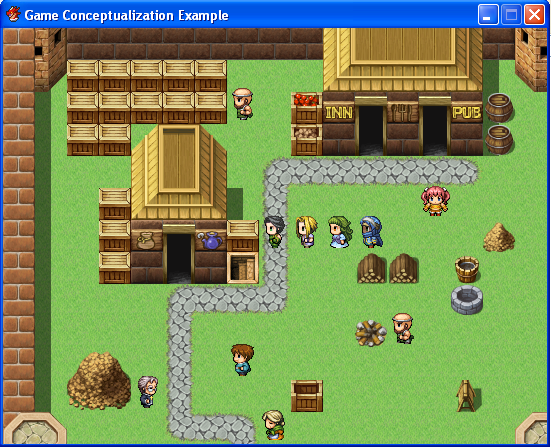 Trying to figure out how to design the game in your head? It can be surprisingly difficult if you don’t have a good way to conceptualize your ideas. After having sat through innumerable pitches, design meetings, and brainstorming sessions I’ve found there’s a really good way to figure out how to approach any type of subject matter for the purpose of making it into a game. Chances are you already have a story, a vision, or an inkling of what you want to create – sharpening that creative insight is not what this guide is about. This guide exists to help you take your juicy concepts and squeeze them into a game framework that helps you keep the idea fun.

To help you learn the process, I’ve cut it up into three steps. After you have a good feel for the steps, check out the sample game I create for this guide (download here) and then review your own game.

When playing a game, each player has a number of choices in front of them. These choices are determined by the game itself – a shooter typically asks a player shoot things, while a racing game asks a player to reach a destination within a set time frame. The specifics of each game genre are mechanical, but as a designer you have to ask yourself what your player’s core decisions are. This is critical to making a video game as without interactivity and the options that interactivity presents your game will be rather flat and uninteresting.

Your player’s core choices may surprise you – let’s look at a classic game, Doom. What is the win condition for an average map of Doom? Take a minute to review or remember the details. Did you find that to win at Doom you just have to reach the exit for the map? Shooting bad guys in Doom is actually an optional activity – one that may be frequently exercised – but to win at Doom you really only have to reach the exit. The core structure of Doom is actually similar to races! You have a limited supply of resources with which to overcome obstacles in pursuit of the finish line. Whether you move around the obstacles or remove them is at your option – and that’s where the gameplay of Doom can actually emerge!

Your game will behave the same way, guaranteed. So start by asking yourself this – what is it that your players must do to win? Then, ask yourself HOW they do it. Once you reach the how, you can start developing the interesting core choices for the player to weigh.

2. Synthesize what you know

There’s an awfully good chance your game will share some traits with other games. That’s not a bad thing at all – in fact, many of the games that are hailed as innovative within their genres have in fact lifted features and mechanics from other games and other genres. Embrace the similarities. At the time of this writing, leveling is a popular feature for first person shooters, but historically leveling was a feature of roleplaying games. The synthesis of the two genres created a new class of game that has become extremely popular.

Being able to synthesize what you know will help you make the core choices you defined in step 1 more interesting. You don’t (and in some cases shouldn’t!) necessarily need to look to other games to synthesize new features, but until you understand your game at an abstract level you will have great difficulty in performing this step. Let’s return to our previous example of Doom – for id Software, the next major leap they made in the genre was Quake. The biggest change between the two games on an abstract level was the use of the 3rd dimension – although Doom is ostensibly a 3D game, your character can’t jump and must rely on level geometry to navigate maps. This changed in Quake, where the player was not only allowed to jump, but new types of maneuvers such as the rocket jump were developed. These innovations were all (loosely) rooted in real life movement; their addition was the synthesis of real life concepts and game concepts. However, if you subtract the additional 3D elements from Quake, it begins to play very much like Doom. This is no accident; the progression of Quake from Doom dictated that new elements be grown out of the concept for what id believed were the important parts of their first person shooters. Go back to your core choices that you determined in step 1 – what would make those choices more interesting? Blending what you know from outside of the game will happen almost by instinct. Don’t shy away from it!

3. Communicate the player’s choices to the player

This last step for conceptualization is often forgotten, and it gets forgotten because the designers lose sight of the big picture while solving problems. It’s natural, it’s human – paying attention to one thing means you aren’t paying attention to the other things. For your players, however, you can control their environment in game so they don’t lose sight of what they’re trying to do. That’s one of your great advantages – your game world is completely under your control, and that means you can set up the perfect situations for every player, often in very subtle but powerful ways. The key is to communicate to the player what their choices are and how they should be evaluating their decisions – just remember that not all information has to be told!

Going back to Doom and Quake, one of the more genius things that those games did was centering the weapon being used by the player. Many other games, including games from the same time period, would offset the weapon to the right or the left to reflect how it would be actually carried. Doom and Quake insisted on deliberately centering the weapon, and as a graphical element it did something incredibly subtle for the player – it gave them a visual line to help them aim their shots. As the core gameplay of Doom and Quake revolves around shooting monsters, centering their weapon helps the player aim without holding their hand (such as with a crosshair or laser sight). Furthermore, the weapon is always visible on the screen – this means that the player will always have the subconscious reminder that they can (and likely should) be shooting at things. It’s a powerful bit of communication that isn’t expressly told to the player – it’s simply shown.

If you haven’t yet, download the example RPG game provided for this guide at this time. It will take you about 30-60 minutes to play through on your first try.

This game was designed with a number of bad choices and a number of good choices. The objective of the design is to demonstrate not only what the core choices of the game should be, but how the synthesis of concepts can be used to expand on the core game, as well as how to communicate all of the above. As the final step of this guide, play through the game at least three times (there’s five endings, so you won’t get bored).

The first time you play through the game, try to figure out what the core choices of the game are.

The second time you play through the game, try and see if you can synthesize ideas from this game into your own. In particular, try to understand why certain elements of the game are the way they are.

The third time you play through the game, try and identify the different means in which your choices are communicated to you, as well as how the game fails to communicate things that would have been nice to know.