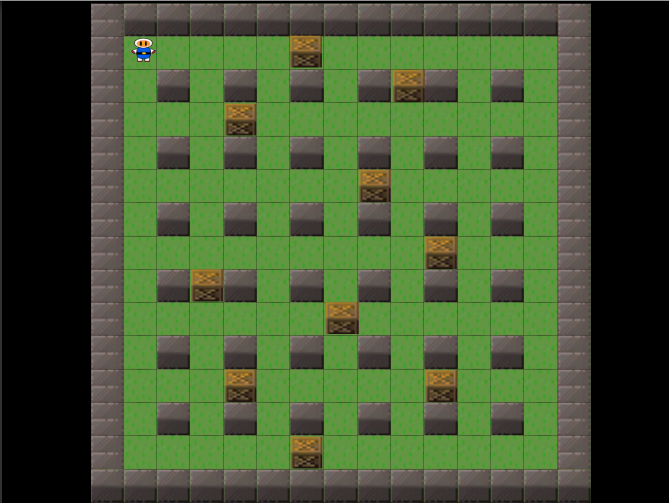 In this tutorial series we are going to build a multiplayer Bomberman game. Our game will have a title scene, which will allow the players to create or join games. Also, it will have a battle scene, where the players will fight each other in a competitive mode.

In this first tutorial we will build the basic infrastructure for our game, such as the Title and Battle scenes, as well as adding the player in our game. In the next ones we are going to keep adding features to it.

Before starting reading the tutorial, create a new Unity project and import all sprites available through the source code.

Once you have imported the sprites from the source code, you will notice that some of those sprites are simply images, while others are spritesheets. The images are already good to be used, but we need to slice the spritesheets into frames.

The way we do that is by selecting the spritesheet in the editor, then changing its Sprite Mode to multiple. Then we can click in the Sprite Editor button to slice it. 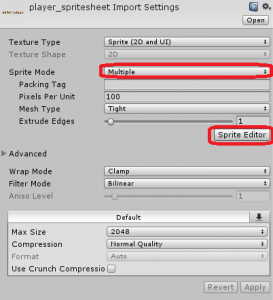 Once you have opened the Sprite Editor window, the slice button will show the slice options. Usually, we can slice them using the Automatic Type and hitting the Slice button, which will find the best separation for each frame. You can use this slice Type for the bomb and player spritesheets. 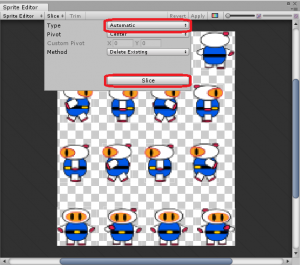 However, for slicing the tileset, selecting the Automatic Type doesn’t work, because some of the tiles are too close, and are too similar too each other. So we are going to select the Grid By Cell Size Type. The cell size for this tileset is 16×16. Finally, we hit the Slice button. 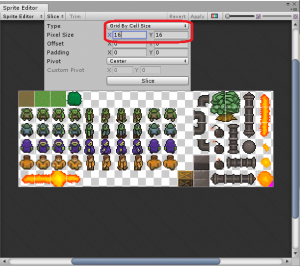 Now that we have configured all our game sprites, we can start building the game scenes, starting by the Title Scene.

A Canvas in Unity is a object where you can put your UI elements, such as texts, images and buttons. In order to create a canvas, simply right-click on the objects hierarchy, then go to UI->Canvas. We are going to call this object TitleCanvas. 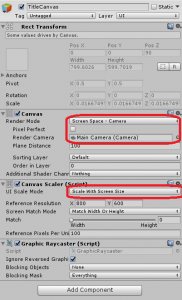 Now that we have our canvas, we are going to add its elements. First, let’s add a BackgroundImage, but adding a new Image as a child of the Canvas (UI->Image). We are not going to select any source image for the background, but we are going to set its color as black. 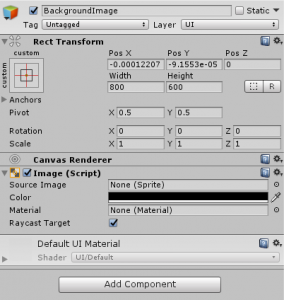 The second child of the BackgroundCanvas will be another image, but this one will be called GameTitle. The game title will be an image from our sprites folder, so select it as the Source Image of the GameTitle object. 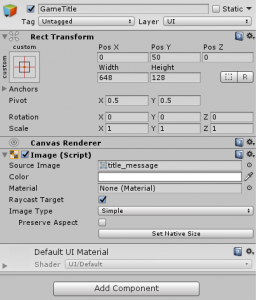 Finally, we are going to add a Text as child of the Canvas (UI->Text), which will be called StartGameText. In this object we need to set its text content and font properties. The figure below shows the settings I used, but you can choose the ones that look better in your game. 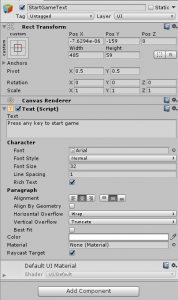 Now that we have all the objects in our Title Scene, we only need to add an event to start the game when the player presses any key.

We are going to start the game using a very simple script, as below.

We only need to implement the Update method of this script and, in this method we check if any key has been pressed (Input.anyKey is true). If so, we load a scene called Battle. However, in order to call this LoadScene method, you need to use the SceneManagement namespace in your script, so remember to do that.

After creating the script, we add it to the StartGameText object. 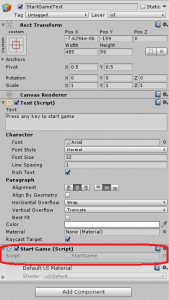 However, if you try running the game it will still not open the next scene. In order to do so, we need to:

The first thing is easy. Simply create a new empty scene and call it Battle. Now, for the second thing we need to go to File->Build Settings. Then, then you can drag and drop both scenes to the Scenes in Build part of the Build Settings window. 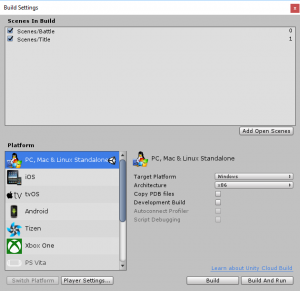 By now, you should be able to run the Title Scene and start the game. 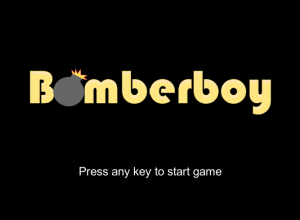 Our next step will be to create the Battle Scene.

The Battle scene will be where all the gameplay happens. Player will be able to move through the scene dropping bombs. Each bomb will explode after some time, creating explosions. Explosions can destroy blocks, but not walls. If an explosion hits a player, the player dies. Also, if an explosion hits a bomb, it makes the bomb to instantly explode.

The first thing we need to do in our Battle Scene, is creating our battle map.

Creating and importing the Tiled map

Since building maps in Tiled is not the objective of this tutorial, I’m not going to explain the details of how to build our battle map using it. So, feel free to use the map provided in the source code (shown below) or to create your own. However, if you create your own map, you should be careful with two things: 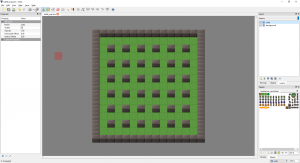 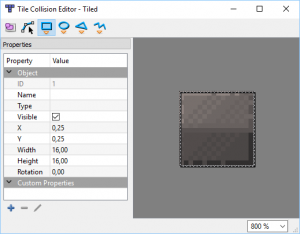 After creating the map, you can save it using the Tiled map format and add it to a Maps folder in your Unity project.

However, we can’t simply open this map in Unity. We are going to need another tool to convert it to a Unity object, so that we can add it in our game.

We are going to use the Tiled2Unity tool for that. This tool receives as input a Tiled map and creates a Unity object in your game representing the map. In this process it also creates the colliders for tiles when necessary.

First, open the Tiled2Unity Unity package, so that it will be imported in your Unity project. This will create a Tiled2Unity folder in your Assets folder, with a Tiled2Unity.export file inside of it (among many other files and folders). This file will be important later to import your map.

Now, open the Tiled2Unity executable file. This will open a window like the one below, where you can select your map to import to Unity. The Export To location is the Tiled2Unity.export file mentioned earlier. 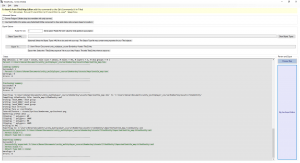 You can also preview your map before exporting. This should show the colliders of the walls. 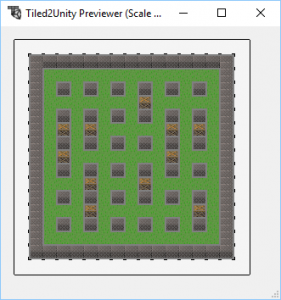 After you export your map to Unity, it will create a prefab for it in the Tiled2Unity/Prefabs folder. Then, you can add this prefab to your game. However, you will need to change its scale, since it will be too big for the game screen, as it is. 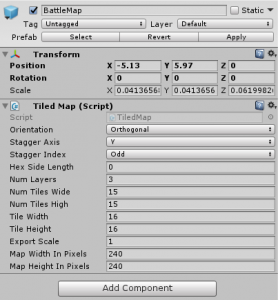 And with that we have finished importing our Tiled map in our Unity project. Now, we are going to add other objects to our Battle Scene. Starting with blocks, which will be exploded with the bombs. 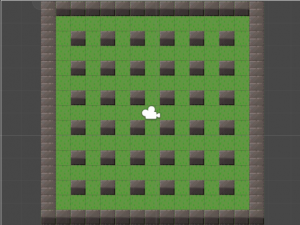 Let’s start by creating a prefab for the block. The block will simply have a Sprite Renderer and a Box Collider. The sprite will be one from the tileset. However, notice that we are setting the Sorting Layer of the Sprite Renderer as Game. This is a custom layer you need to create, so that the blocks appear above the map. 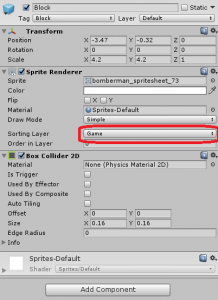 Then, we are going to add an empty object as child of the BattleMap. This empty object will be called blocks, and it will group all the blocks.

Now, we can add Block prefabs in our game, and make them children of the blocks object. You can put the blocks whenere you wish (the figure below shows an example). However, be aware that you need to properly set the block scale, so that it appears in a reasonable size. 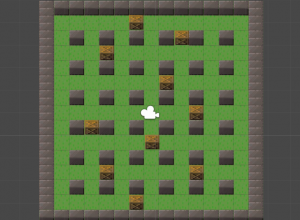 Now that we have the walls and the blocks, we are going to create the Player object of our game.

The first thing we need to do is creating a Player prefab, and allowing it to navigate through the map.

So, create a new Prefab called Player with a Sprite Renderer, a Rigidbody 2D (so that we can control its velocity), and a Box Collider 2D (to check for collisions). Also, you will need to adjust its scale, so that it has a reasonable size in our battle map. 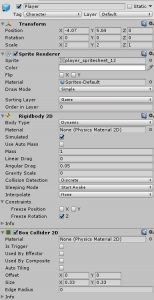 Now, we are going to create a new Script called Player Movement as below. The script gets the movement axis (horizontal and vertical) in order to determine the player velocity in both directions. The way the player moves is as follows: the player can move to a given direction (for example, to the left), if it is not already moving to the opposite direction (to the right).

So, the first condition in the script checks if the player velocity is less than or equal to zero (which means the player is not moving to the right). If so, we can change its velocity in the X axis to make it move left. We do the same for all directions. In the end, we set the player object velocity.

Now, we add this script to the Player prefab, and if you try playing the game now, you can already move the player. However, it is still not playing its walking animations. So, our next step will be to add the player animations and their transitions. 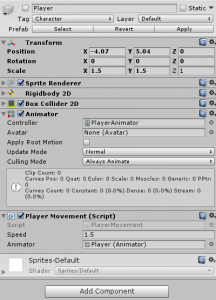 The idle animations will only show the player standing in a given direction, so they will have only one frame. The walking animations will have the frames for that walking movement. The figures below show the examples for the IdleLeft and WalkingLeft animations. You can create the other ones in a similar way. However, notice that you need to properly set the number of Samples in the animations.

Now we need to create the transitions between animations using the parameters. There will be three types of transitions:

Adding all those transition rules, the PlayerAnimator should look like this in the end:

However, there are still some details we need to fix in our animations. First, the walking animations should loop when they end. So, select those animations, and check the Loop Time box. 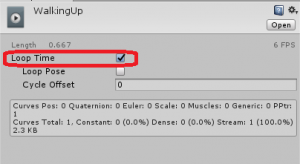 Also, in order to have more smooth transitions between the animations, we are going to set the delay between them to 0. We can do that by selecting a transition, then checking the Has Exit Time and Fixed Duration boxes and setting the Transition Duration to 0. 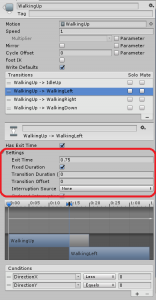 By now, you can try playing the game and moving the player. Check if all animations are playing correctly, and if the player is correctly colliding with the walls. 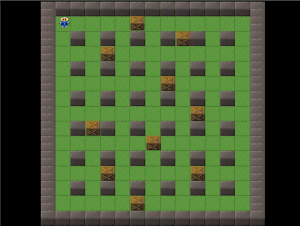 And this concludes this part of this tutorial series. In the next part we are going to allow the player to drop bombs, as well as making the bombs to explode and destroy blocks in the game.