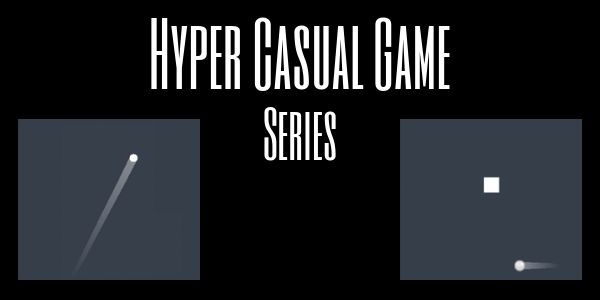 During this three part tutorial series we will be creating a complete Hyper Casual Android game. The term “hyper casual” is a relatively new term used for simple but addictive games that have minimal art and bright colors. If you have been paying attention to the app stores, you will see many hyper casual games topping the charts.

The first part of the tutorial will cover the project, the player, and camera setup. We will be creating the sprites for this game right inside the Unity Editor, and will be adjusting the project settings so that they match what is needed for an Android platform mobile game playable in portrait 480 x 800 resolution.

To ensure that you will be able to effectively follow along with this tutorial you should be comfortable with:

Before proceeding any further with this tutorial go ahead and make sure you are using Unity version 2018.2.13f1. You may use an older version of Unity, but you may notice differences between the version used in this tutorial and your version, and it may make it difficult to follow along effectively. Go ahead and create a new 2d project, you can name the project whatever you like. Switch the platform build settings to Android, generally Unity will default to windows build settings on a new project.

Create 3 new folders under assets in the project tab, name them: Sprites, Scripts, and Scenes (Alternatively, you may name them what you wish, but it’s common practice for good organization to keep naming conventions simple and obvious so that you know right where to navigate when looking for something in your projects). If you are using Unity version 2018.2.13f1, you may have noticed that there is already a folder in the assets section of the project tab named scenes. Unity now creates this folder and  a scene called “Sample Scene” with any new project that is created. Go ahead and rename the scene name to “Game.” Save the scene and project.

In the Hierarchy tab select Main Camera and in the inspector tab change the following: Background color to a black or grey color, set the projection to Orthographic (Top down view), and the size to 10. 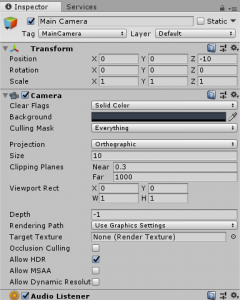 We will be writing some code later on in this tutorial series where we will change the background color so that it changes during game play. So, the initial color of the background really isn’t that important right now.

Navigate to the Sprites folder we have already created and right click, select create>Sprites>Circle. This circle will represent our player. Go ahead and drag the circle player into Hierarchy tab, and rename it to “Player.” There are a few settings in the inspector we need to adjust to finish up the initial player setup in the game scene. In the Inspector window on the transform component adjust the Y position to -8 and change the scale in the X and Y to 0.5. You can leave the Sprite color at white for now. Add a new script to the player object in the inspector and name it “Player.” This script will control all the behavior of our player. 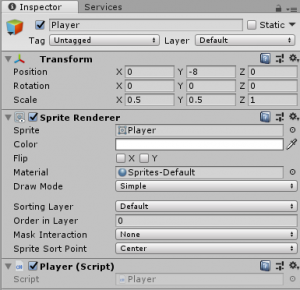 Open the Player script up in your code editor, this tutorial uses Visual Studio. We need to add some movement behavior to our player. Go ahead and create a function called “PlayerMovement.” Create a FixedUpdate function under the Update function that is already in the script. We will be calling the “PlayerMovement” function in FixedUpdate. We also need to create a float variable called angle and set its initial value to 0 and create an int variable named xSpeed and set the initial value to 3.. We will add the following code to control the player movement on the X axis and also control the angle of the player as it moves. Essentially we will end up with the player moving back and forth on the X axis(Horizontally), you can go ahead and save the script and go back into the Unity Editor and hit play and make sure everything is working as intended. Later on we will be controlling the player movement by touch, so that the player will move upwards at an angle depending on where the player touches the game screen on the mobile device. Save the scene and project.

Now we will create the “PlayerInput” function. Create this function right under the Player Movement function. This function will get the players touch input and then move our player(the circle) on screen upwards as long as the player touches the screen. So as long as the player holds their finger on the game screen on the mobile device the player object will move upwards. We also need to create a variable called ySpeed and set its initial value to 30. We need to add force to our rigidboody2D in order to get the player to move upwards as the screen is touched. We will need to create a variable for our Rigidbody2D component and name it PlayerRigi. Since our player object will soon have a rigidbody2d attached to it, and we will be moving the player object via the rigibody we need to create the variable and then get reference for it in the “Awake” function. You can create the “Awake” function right below are variable declarations.

Create and Attach a Trail Renderer to Our Player 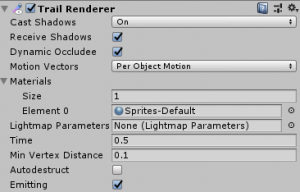 Now click on the width input box and change the value to 0.5. And using the mouse drag the red diamonds downwards to make it look like the screenshot below. 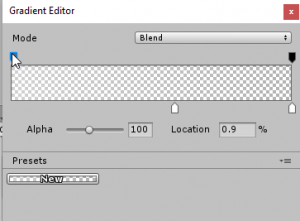 Now go ahead and hit the play button in the Unity Editor and test out our new spiffy trail renderer.

We now need to get our camera to constantly follow the player as they are moving. This Hyper Casual Game wouldn’t be complete if the player couldn’t see where they were going to avoid the obstacles we will be creating shortly. In order to not make this game so difficult, we need to include a Y offset on the camera so that the player can see a little bit ahead of themselves as they play to sort of “ready” themselves and be able to move at the right moment to avoid the obstacles ahead.

Click on the Main Camera in the Hierarchy tab, and add a new script component and name it “CamFollow.” Open the script up, and we will begin to write the code we need to get this camera following our player correctly.

We need to declare two variables: The first is the Transform of the player, you can call it playerTransform and the second is for the offset, make this a public float (So we can access it in the inspector) and call it “offset.”

We now need to create a tag for our Player and tag the Player because we are going to get reference to the Transform of the player in the start function. Remember, tags are case sensitive in Unity so make sure you type it correctly. 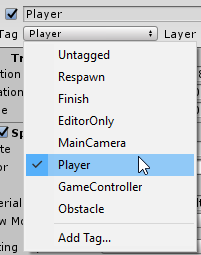 Now we need to create a “LateUpdate” function below the Start function. Why are we using LateUpdate, you may ask? Since we are moving the Player in FixedUpdate (FixedUpdate is called every fixed frame rate) on the Player script we are using LateUpdate so that we don’t get “jerky” camera movement, and since LateUpdate is called after FixedUpdate and that’s where the player movement is being handled, the player’s movement is already calculated so that we have more precise data on where to move our camera to follow the player more accurately.

Save the script, and go test out the functionality in the Unity Editor by hitting the play button. You should see that our camera in the scene is now smoothly following our player as the game object moves upwards. If you click on the camera object in the Hierarchy you can watch the value in the transform component go up as the camera follows the player object.

As of right now we have our player moving, the camera following our player smoothly, player input is being taken in, and the player game object has a spiffy little trail renderer following behind it as it moves. This is a three part tutorial series, in part two we will tackle the first obstacles the player will need to avoid, we will handle collision of the obstacles and the player, keeping score and displaying it, and we will work on the game manager.