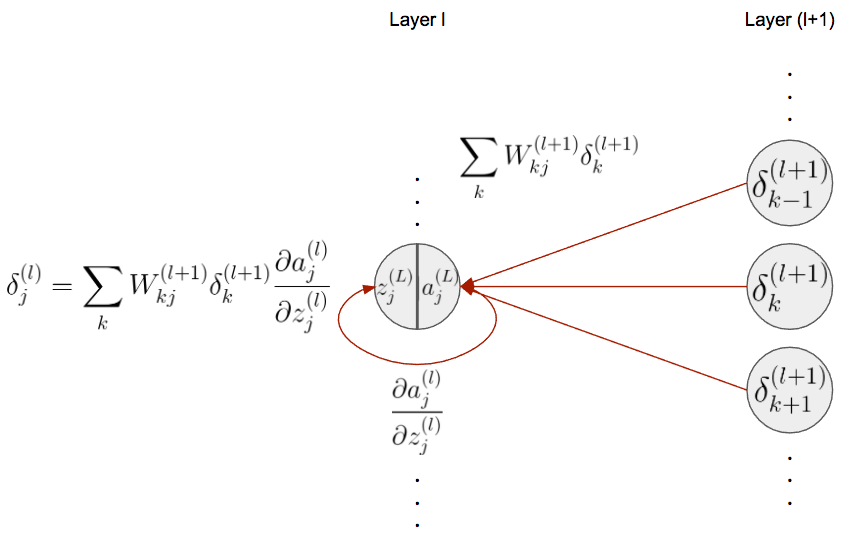 Last time, we formulated our multilayer perceptron and discussed gradient descent, which told us to update our parameters in the opposite direction of the gradient. Now we’re going to mention a few improvements on gradient descent and discuss the backpropagation algorithm that will compute the gradients of the cost function so we can update our parameters. Download the full code and dataset here.

Instead, we can take a randomly-sampled subset of our training data to represent the entire training set. For example, instead of running all 60,000 examples of MNIST through our network and then updating our parameters, we can randomly sample 100 examples and run that random sample through our network. That’s a speedup factor of 600! However, we also want to make sure that we’re using all of the training data. It wouldn’t be a good use of the training set if we just randomly sampled 100 images each time. Instead, we randomly shuffle our data and divide it up into minibatches. At each minibatch, we average the gradient and update our parameters before moving on to the next minibatch. After we’ve exhausted all of our minibatches, we say one epoch has passed. Then we shuffle our training data and repeat!

This technique is called minibatch stochastic gradient descent. Mathematically, we can write it like this.

Here’s an algorithm that describes minibatch stochastic gradient descent. We can repeat this algorithm for however many epochs we want.

Then we initialize our weights and biases for each layer. Remember that each layer has a different number of neurons and thus requires a different weight matrix and bias vector for each.

One additional heuristic is to initialize the parameters to small, random numbers. Why don’t we just initialize all of them to be the same number like one or zero? Think back to the structure of a neural network. To compute the input into the first hidden layer, we take the weighted sum of the weights and the input. If all of the weights were one, then each hidden neuron receives the same value: the sum of all of the components of the input. This defeats the purpose of having multiple neurons in the hidden layers! Instead, initialize to small, random numbers to break the symmetry. There are more sophisticated ways to initialize our weights and biases, but initializing them randomly works well.

Now we can define a few useful functions that can take an input X, where each row is a training vector, and feed it forward through network. In the case of MNIST and for the purpose of training, X is a matrix of size

because our minibatch size is

and our flattened images are of size 784. The function is general enough to accept minibatches of any size. We iterate through all of the weights and biases of our network and perform

but is then updated in the innermost loop so that we’re always referring to the activation of the previous layer.

Additionally, we define a helper function that converts the one-hot vector into a number that we can use to compute the accuracy.

Now that we have those functions defined, let’s get to implementing minibatch stochastic gradient descent. At the start of each epoch, we shuffle our training data and divide it up into minibatches. Then, for each minibatch except the last one, we call a function to update our parameters.

Note that we update parameters for all of the batches except one! For this last batch, we compute the accuracy to act as a kind of “measure of progress” for our network. This is often called the validation set.

Let’s take a look at how we update the parameters. nabla_W  and nabla_b  represent the total update for all of the weights and biases for this minibatch. In the loop, we accumulate the gradients so that we can apply the update rule in the last few lines of code. We average over the size of the training batch and multiply by the step size or learning rate.

The most important step happens in the backprop  function. This is where we compute the gradient for all of the weights and biases for an example.

(The notation I use is consistent with Michael Nielsen in his book Neural Networks and Deep Learning.)

Now we can finally discuss backpropagation! It is the fundamental and most important algorithm for training deep neural networks. To start our discuss of backpropagation, remember these update equations.

The ultimate goal is to solve for the partial derivatives of the cost function so we can update our parameters. Can’t we just use calculus to solve for these? Well the answer isn’t quite that simple. The problem is that each parameter isn’t directly connected to the cost function. Consider a weight value connecting the input to the first hidden layer. It isn’t directly connected to the cost function, but the value of the cost function does depend on that weight, i.e., it is a function of that weight (and every weight and bias in the network). So in order to update that weight in the earlier layers, we have to pass backwards through the later layers since the cost function is closer to the weights and biases towards the end. Hence the name backpropagation. Going backwards through the layers corresponds to using the chain rule from calculus, and we’ll see more concrete examples of it.

Intuitively, this represents how much changing a particular pre-activation (as a result of a change in a weight or bias) affects the cost function. We’ll call this the local error gradient. Now the only measure of quality of our network is at the very end: the cost function. So to start backpropagation, we need to figure out

(suppose the output neurons are indexed by

in the output layer. The cost function is directly a function of that neuron. We need to go backwards through our network, and that corresponds to taking a derivative! So to go back through the cost function to a particular neuron

, we take the derivative

. But this lands us at the post-activation

. Now we can compute

by multiplying these derivatives together! In calculus, this is called the chain rule, and it is essential to backpropagation. 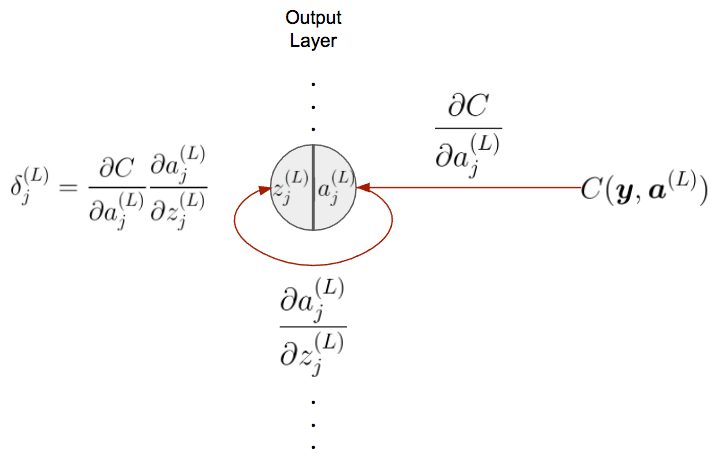 When we solve equation, we get the following.

and all of the neurons, indexed by

. We don’t have to consider the

so we can use those as the starting point. To backprop through the weight matrix, we flip what index we sum over. Since we’re going to a layer indexed by

from a layer indexed by

, we flip the index in the summation to sum over all of the neurons in layer

. Looking at the diagram, this makes sense because neuron

is connected to all neurons in the

th layer. After doing that, we land at the post-activation of layer

. Almost there! We can use the same trick in the previous equation with the partial derivative.

After expanding this equation, we get the following.

Excellent! We’re almost there! Now that we have a way to backpropagate our errors, we can use this local error gradient to calculate the partial derivatives of the weights and biases at a given layer. This is the entire point of backpropagation! Unfortunately, there’s no clever graphic we can refer to; we can directly use the chain rule to figure out the partial derivatives.

We’ve finally accomplished our goal! Now we can compute the gradient of the cost function with respect to each weight and bias at each layer! Now let’s write down backpropagation as an algorithm and convert the algorithm to code.

After we computed the gradients, we can apply gradient descent to update our weights and biases.

Let’s see what backpropagation looks like in code. Note the first step is to feed forward an input; the reason we can’t use the feedforward function is because we need to cache the pre and post-activations so we can use them in the backward pass. The rest of this function is solidifies the mathematics into numpy code. We first compute

, then we iterate through our layers backwards and use the formulas to compute

for each weight and bias in our network.

We can take that threshold function and smooth it out. The result is what we call a logistic sigmoid, or sigmoid, for short. The sigmoid is defined by this equation 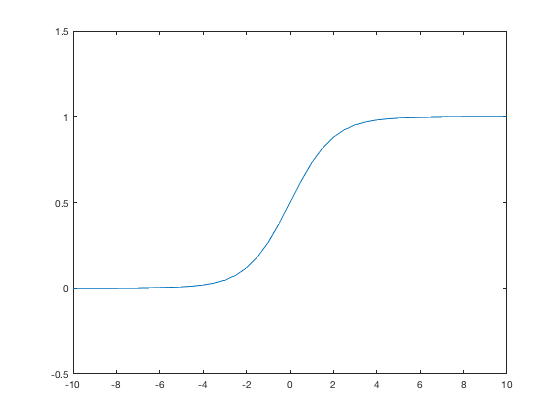 The sigmoid has several nice properties: it acts as a squashing function by taking its input and squashing it between zero and one; is smooth and differentiable; and a small

results in a small

In code, we can write the sigmoid and its derivative like this.

In the past few years, sigmoids have fallen out of practice since they saturate for high and low inputs, meaning the derivative of the sigmoid is very small. Take a look at the ends of the sigmoid: the slope hardly changes at all! Instead, researchers have favored a new activation function called a Rectified Linear Unit or ReLU for short.

We can use our new class very simply like this:

The MNIST dataset and code to load MNIST is in the ZIP file!

Here’s some output running for only 10 epochs with a batch size of 128.

To recap, we discussed an improvement on gradient descent called minibatch stochastic gradient descent. Instead of performing an update after seeing every example, we divide our training set into randomly sampled minibatches and update our parameters after computing the gradient averaged across that minibatch. We keep going until all of the minibatches have been seen by the network, then we shuffle our training set and start over! Next, we discussed the fundamental and most important algorithm for training deep neural networks: backpropagation! Using this algorithm, we can compute the gradient of the cost function for each parameter in our network, regardless of the network’s size!

Backpropagation and Gradient Descent are the two of the most important algorithms for training deep neural networks and performing parameter updates, respectively. A solid understanding of both are crucial to your deep learning success.